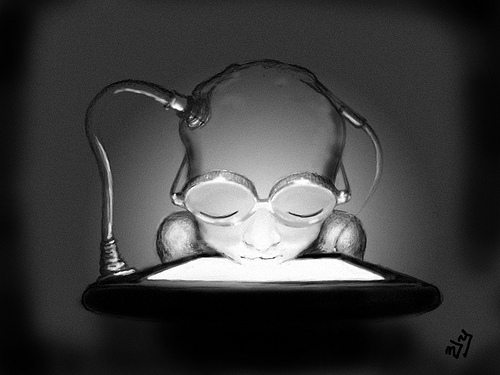 A recent pilot study at Boston Children’s Hospital has found that video games can help calm children who express serious anger episodes. More often than not, children are unwilling to engage with psychotherapy to help them control their emotions. Jason Kahn, PhD, and Joseph Gonzalez-Heydrich, MD, created RAGE Control—a video game that could change the way doctors interact with children. Boston Children’s Hospital tested RAGE Control to assist children in controlling their emotions so that they can effectively use these skills in real-life situations.

RAGE Control is a Asteroids-style slide scrolling shooter where players are told to shoot down enemy ships while ensuring that they aren’t shooting friendly ships. While children are playing, a monitor on a finger tracks their heart rate. By using biofeedback, when the heart rate goes above a certain level, the players lose the ability to shoot. The structure of the game teaches children to keep calm throughout the game so they can improve their performance. A shooter game to keep children calm—does that make sense? To Peter Ducharme, the study’s lead researcher, shooter games can potentially increase aggression in youth. However, this style game was well received with the children in terms of participation because it is a popular and familiar style.

For children with anger troubles, the connection between the brain’s central executive and emotional centers are weak. Trying to increase the parallel processing of both centers, RAGE Control encourages children to learn how to use both at the same time to score points. In a study of two groups of youth aged 9-17, Peter decided to test the effectiveness of RAGE Control by comparing the results against a group of youth who only received standard anger psychotherapy. The first group, with 19 children, received the standard treatment. The second groups of 18 people got the same standard treatment, but were allowed to play RAGE Control for the last 15 minutes at each of the five sessions.

What were the results? The second group of children that were able to RAGE Control reported better control at keeping their heart rate down. They showed decreases in anger score based on the State Trait Anger Expression Inventory-Child and Adolescent (STAXI-CA), specifically in the focus of intensity of anger at a particular time, the frequency of anger over time, and expression of anger towards others and objects (ex. Insulting, swearing, or punching). The most exciting result was that the children found the experience helpful compared to the standard treatment. “Kids reported feeling better control of their emotions when encountering day-to-day frustrations on the unit,” Ducharme said in a statement. “While this was a pilot study, and we weren’t able to follow the kids after they were discharged, we think the game will help them control their emotions in other environments.”

Boston Children’s Hospital isn’t just stopping at Level 1 of RAGE Control. Further studies are now testing Level 2. The investigators are conducting randomized, controlled clinical trials with an added cooperative element. The children pair up with a parent for 10 game sessions. Using similar principles, if either of their heart rates go up, then both players can’t shoot. This encourages the child and parent to help each other become calm. Biofeedback seems to be the future of helping children and adults become more emotionally intelligent. In addition to anger management, biofeedback has been used to help control depression, anxiety, and ADHD. This is an epic win for gamification and healthcare!

via ScienceDaily — image by Brooks Elliott