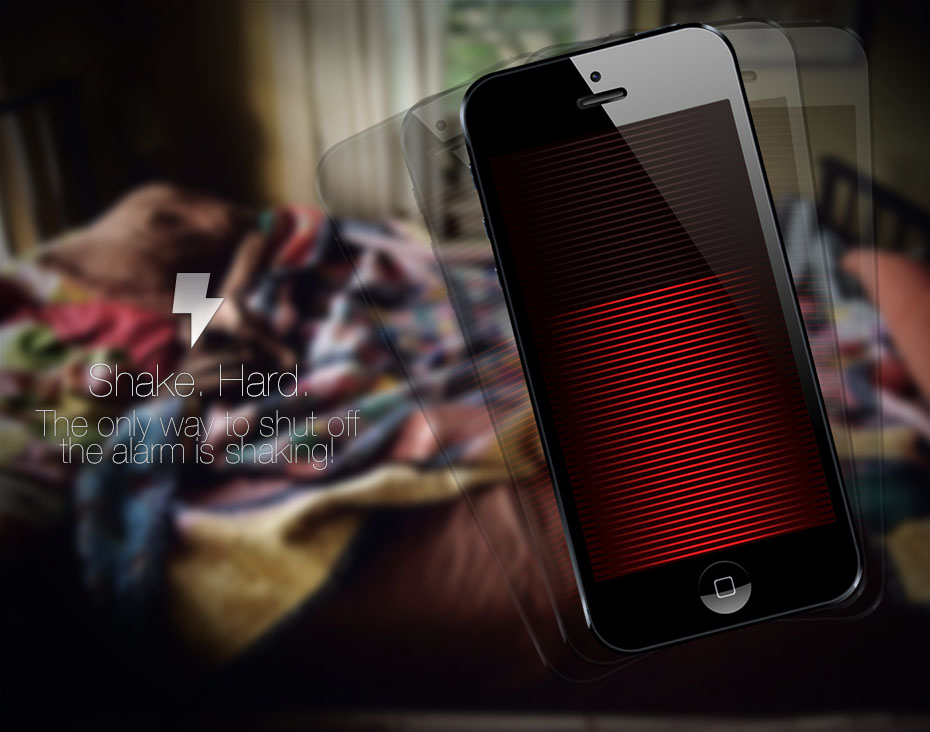 Do you play endless mind games as you hit snooze on the alarm clock each morning?  My rule of thumb is to never snooze more than three-times before a certain hour in the morning in order to give myself a “mission” to accomplish. However, a newly redesigned alarm app called Wake N Shake actually turns that morning snooze-fest into a gamified and social experience.

Wake N Shake was originally designed to be a “merciless” alarm application that forced you to shake your phone like a madman before it shuts off. Its new version now includes daily leaderboards and achievements to make the experience of daily phone shaking a little more interesting. As your alarm goes off in the morning, the app will then start ringing (with optional maniacal laughter) and will require you to shake a certain amount depending on which of the 10 intensity settings the app is set on. Score is determined by how quickly you can shake the phone to fill out the bar and the level of intensity set.

The leaderboards leave little to be desired because of the very nature of the times in which you would be using the app: beginning of the morning and at the end of the evening. Social elements should be engaging enough to want to use at any time but this app would only have messages relevant for mornings.

As one of the screenshots show, one person on the leaderboards says “Coffee!”. This is information that you might care about for a few seconds as you wake up but its generally not additive to making your mornings any better, especially if you’re the type of person who would use an app like this in the first place. The same goes for the evening, if you’re even changing your alarm on a daily basis. It’s not really meaningful to know a friend drank coffee in the morning a few days ago.

The achievements are also shallow in that they are clearly meant to get the user to use the app as much as possible. While this is a one of the primary function of achievements, there’s no reason why it couldn’t be done in a more subtle way that does not make the achievements not read like a list. protip: If your app’s achievements read as a series of of doing an action “n” times over and over and you can’t make them vary in other way, you probably shouldn’t have them.

Despite this, I do see the inherent value of using streak achievements for waking-up on time each day as it could be a very valuable method for productive habit-forming. However these achievements work against themselves in that they only encourage you to wake up “25 times in a row” but it does not encourage you to maintain that streak on a daily basis. If you accomplish waking up 25 times in a row, then thats great but the app is not supporting your ability to do that again if you’ve broken that chain.

Wake N Shake is a very interesting and novel approach to the morning-alarm routine but for the people would even consider using this app in the first place, the new gamified elements will likely not sustain long-term engagement because they’re simply too shallow.

If you’re interested in trying this gamified alarm for yourself, Wake N Shake 3.0 is available on iOS for a promotional price of 99 cents. Its also available on Android but its still in beta and only has the shaking game without any of the other gamified elements.

You can check out a girl shaking her phone in frustration in the video below: