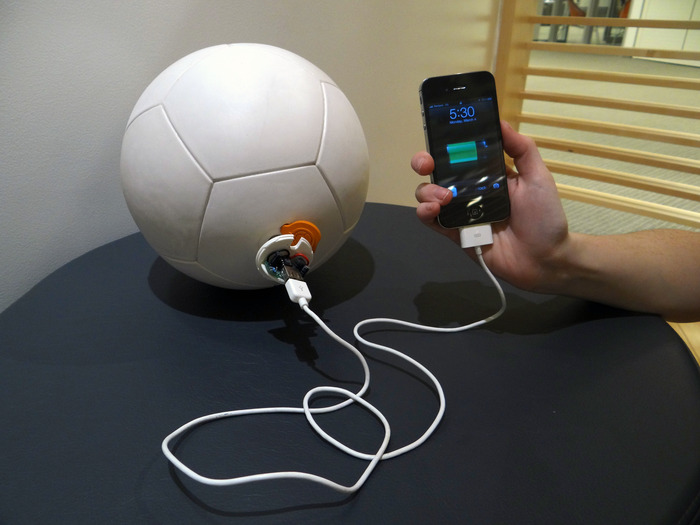 If you’re able to read this, then you have ample electricity for everyday means. However, there are places in the world that have little-to-no available electricity for simple purposes like lightning their homes at night. Some folks have made a soccer ball that’s able to produce electricity by simply being kicked around in order to provide assistance to those who need it.

Over at Uncharted Play, the creators have invented an energy generating soccer ball called Soccket. The ball produces electricity from the kinetic energy made when kicked around and it only takes 30-minutes of play to power an LED light for 3 hours. Exercise and free energy? Tell me more!

Their KickStarter goal of $75,000 was met, and should they acquire more donations then they would move to make portable energy tracking mechanisms and cell-phone chargers for the Soccket ball. All proceeds go to creating product and to further enhance the existing concepts.

The ball itself is a bit heavier than the standard soccer ball, but it’s also much more durable and water resistant. So far it’s being tested in resource-lacking areas in South America and North America. Soccket uses a pendulum-like mechanism that builds up and stores kinetic energy created by the rolling motion of the ball. Since there’s no air in it it’s unable to be deflated. I think we can all agree that in our lifetimes we’ve gone through tons of deflated soccer balls.

Soccket already has some big supporters; such names as Ashton Kutcher and Bill Gates are already fans. Even Bill Clinton has stated, in reference to CEO Jessica O. Matthews “It’s quite extraordinary, really; if ever there was an innovator, she’s it.”

Soccket is an everyday soccer ball with a catch: it provides electricity. Soccer is the most popular sport in the world, so adding renewable energy to the mix is only making it more awesome. Now that soccer and electricity generation are being successfully gamified, what do you think we’ll see next?