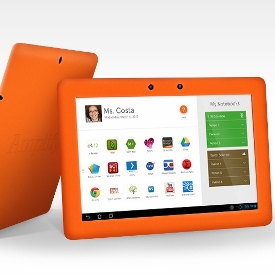 Amplify Tablets are changing the way we educate tomorrow’s schools

Before walking into most of today’s classrooms,  students are required to power down any and all of their devices including phones, tablets, and computers. They are seated at a desk, asked to remove instructional material from their book-bags, and required to listen to a teacher as he or she highlights the important features of the day’s class. Rarely are students allowed out of their seats and when they are it’s usually to use the lavatory. It seems today’s classroom is less about educating and more like boarding an airplane.

There is little to zero interaction between students, and their only source of information is located on a few pages in front of them or referenced by the instructor. A new digital production company, Amplify, is developing software that may very well revolutionize the way students, teachers, and classrooms interact. Amplify has designed a learning platform for tablet devices that effectively empowers students to take a more active role in their education.

From the games introduced for the Amplify Tablet, one of the more notable presentation was Lexica by Schell Games. Lexica was designed to encourage middle school students to not only spend more time reading but engaging with language arts as well. Set in a mystical library, Lexica is an immersive 3D fantasy action/puzzle game that aims to support students language arts skills. Players are tasked with challenges that focus on spelling, syntax, and vocabulary with the larger goal of improving and enhancing their reading. Throughout the game, students are also able to share their writing with friends and other players. CEO of Schell Games, Jesse Schell, describes Lexica as “a cross between Kingdom Hearts and Pokémon” that incorporates some of history’s most prominent literary characters.

While Lexica is just an example of one of the many reading games soon available for the Amplify Tablet, its potential for increasing student engagement and overall reading ability is significant. As more students turn to new forms of digital media for completing or aiding in assignments, platforms such as Amplify’s may be leading the way to a different type of classroom altogether.

So imagine a classroom where students didn’t have to turn off their devices, but instead their devices were their textbooks. Envision a space where a child could explore, apply, and get immediate feedback for the work they’ve accomplished using a tablet device. Edtech companies like Amplify are allowing students this possibility by skipping the boarding process entirely, and letting students take off faster than ever.

Click here for a link to an Amplify Tablet Presentation