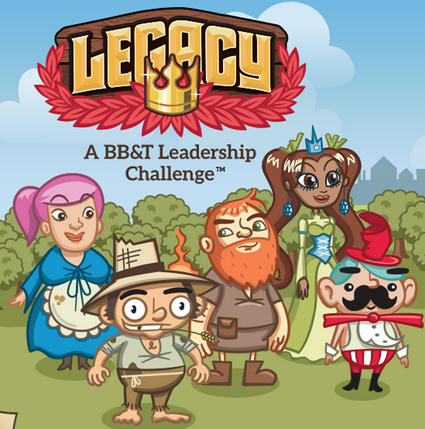 BB&T is Establishing Gamification’s Legacy in the Banking Industry

Branch Banking and Trust Corporation (or BB&T) is a North Carolina-based bank that operates in more than 1,800 financial centers across the United States. Their services include commercial and retail banking as well as insurance, investments, mortgage, corporate and consumer finance.

BB&T has recently proved to be innovative through the addition of a mobile gaming application into their employee training program, with the purpose of teaching valuable leadership skills based on the premise that Beliefs influence Behaviors, which lead to Results, which influence beliefs, and it cycles on…

The name of this game is Legacy and it’s based on the story of a province in feudal times called Failburg. Unlike near-by lands in the kingdom, and home to very disorganized and miss-informed people, this town has long been unsuccessful and has trouble making any progress. Your journey begins as a foreigner that is called upon by the King who asks you to help him influence change in the life of Failburg’s people. Your goal as player in this game is to coach each main character through short conversations and turn them into successful individuals. If you succeed in this role, (spoiler alert!) your character will get elected leader of the town council and even get to wear the King’s crown.

Legacy gives the player room for meaningful choices, which adds a nice kick to the game’s recipe. You get to decide both content and approach of the conversations with each character throughout the narrative. What you tell them and how you deliver this content determines your success on each interaction. It reminds me of hidden objects games where you as a player have the choice between a number of possible interactions with characters in the story, and your progress depends on how you conduct these interactions and add to the narrative of the game. 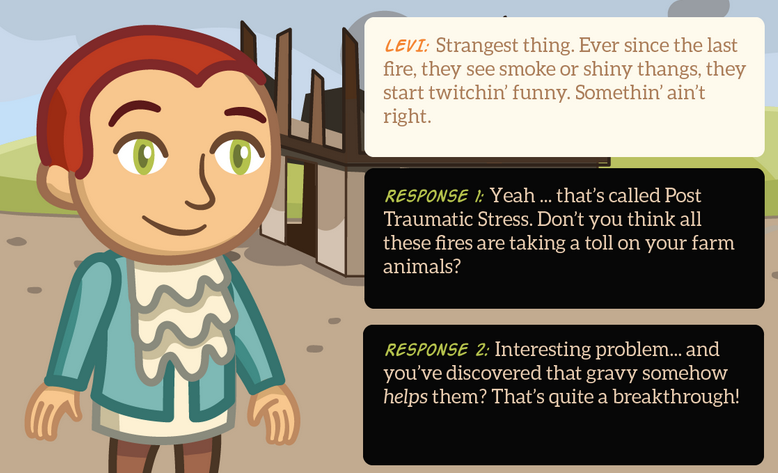 Besides elements such as progression indicators that provide instant feedback to the player, this app includes 25 quests and 10 mini-games. The latter were seemingly introduced to make the app feel more like a mobile game. This helps balance the analytical skills required to handle the variety of input you must choose from in order to obtain a specific output from each character. The objective is easy to understand although the game’s true aim is to teach leadership by having you make the town successful through the accomplishments of each individual in it.

This app tries to teach you a solid set of coaching tools to help you become an effective leader, which happens by enabling others succeed and make progress for themselves. Legacy was developed by Chaotic Moon Studios and is free to everyone in and outside BB&T, available for both iOS and Android.

This is a good example of games that allow players to fail and lose nothing. In fact, it is meant for players to have the opportunity of learning through failure, have the chance to try again, and repeat the process as many times as necessary to improve their score. This is the magic of learning through games, and a core pillar behind the enormous potential gamification has when applied correctly.

When done in the right direction,gamification applied within the banking industry is good news for everybody. Instead of banks spending their budget attracting customers to spend more, they can focus on promoting sustainable financial practices.  This is perhaps the best legacy there could be, and it reveals a strong connection between personal finance and elements of intrinsic motivation that fuels gamification to its maximum potential.