Linkin Park is clearly not afraid of new marketing strategies as evidenced by their new LP RECHARGE game,  a free-to-play action game designed to raise attention to environmental issues and is set to the tune of Linkin Park’s new remix album, aptly named, Recharge.

Given that Recharge isn’t exactly a new album and is rather a compilation of remixes of songs (like Reanimation) off their last album Living Things, it looks like Linkin Park’s game was created to drive a little more interest in the album and their cause.

Developed in partnership with Kuuluu Interactive Entertainment, LP RECHARGE takes place in a not too distant future in which humans have consumed nearly all natural resources on the planet and the last remaining resources are being seized by killer robots.

The game is presented from a third-person top down view similar to Diablo but instead of killing demons, you’re firing laser beams and energy jolts to blow up robots in the most efficient way possible (energy conservation). This is definitely a game made for Killers, Achievers and Explorers. LP RECHARGE engages them by making leveling up quick and easy by learning new abilities, landing quick victories over the robots, and even playing the game for two or more days in a row.

The first gamified mechanic I came across was having my avatar’s rank and place in the leaderboards, which was mostly determined by how much you played, the gear you owned, and your ability to access certain areas in the game. After playing for awhile, I did realize this game is mostly just about getting as many crystals as possible in order to exchange them for better gear in the shop. I also enjoyed finding random energy and crystal caches in certain missions, which could only be find by exploring each mission’s environment. There are also some social elements present too; you can invite friends to compete against or you can even save friends in certain missions (and earn a Hero badge in the process). Playing this game after a long period of time did not really instill a sense of community with other live players because you’re never playing alongside the general public. You’re only playing people you invite into your game only.

LP RECHARGE seems to do a poor job at really demonstrating progression and pacing because feeling alone and never getting my rank up past “recruit” for my duration playing was disparaging. And on top of this, I didn’t exactly feel like my pledge to the environment was particularly meaningful either.

Basically, each player receives recharged energy for completing levels, and your specific contributions will increase that worldwide number and your personal contribution count. This is probably the weakest part about the game because it doesn’t exactly convey your specific impact on the total worldwide energy recharge (especially when they compare you to the best player in the world directly next to your score) and the meaning of this recharged energy is lost-in-translation when you attempt to place in real-world context. The game wants to raise awareness for 3 different energy projects around the world but playing this statistic doesn’t really accomplish that.

If playing this game over and over again gets me a lot of energy, how does that teach me to use less energy, exactly?

There are some loading screens with environmental tips but like most other social good games that do this, their effect on reducing power consumption is likely menial. 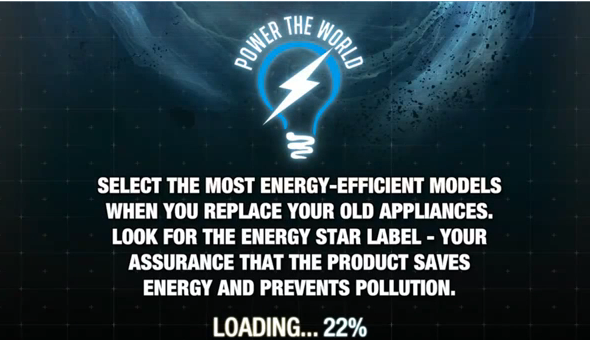 Although I pledged in the beginning to be more conscious of my energy-use, I eventually grew weary of the puzzles and robot shooting simply because I got fatigued with the game. I just did not feel like I was progressing enough and there wasn’t enough of a social push to keep my interested either. This game might be worth checking out if you’re a die-hard Linkin Park fan but there are probably better ways to help the environment.