Without going to far into detail, this year’s Maker Faire at New York City’s Corona Park was absolutely incredible.  I’ve been to the Hall of Science as a young child but over 15 years later, I felt as if I were transformed back into a child re-experiencing a world of wonder. However, this time – it wasn’t only the world of science I relived, I experienced the pinnacle of human creativity and engineering amassed by a wonderful eclectic group of engineers, artists, geeks, children, and parents all brought together to experience each other’s projects. The first story I would like to share today is from Sproutel co-founder, Aaron Horowitz, and his story about Jerry the Bear. 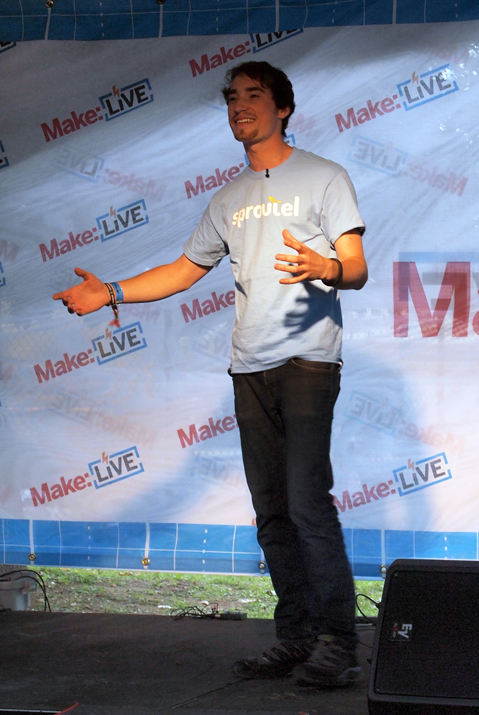 Aaron’s session was entitled Just Start Building and went through his experience of becoming a Maker after never having created anything before. During his time at Northwestern University, Aaron found himself completely changing his degree path, learning how to engineer robotics, creating a prototype educational-bear,  finishing his degree on Skype while participating in a startup accelerator program, and founding his startup, Sproutel. Aaron story is noble and inspiring but that prototype bear, now known as Jerry the Bear, is an excellent product in of itself and a testament to effective gamification design.

Jerry the Bear is an educational tool to help children manage and learn more about Type-1 Diabetes. Inspired by Aaron’s own childhood experience with Human Growth Hormone Deficiency, that disease and Type-1 Diabetes each involve frequent injections that are often painful for the child and difficult to adjust to. Jerry the Bear aims to ease that adjustment process and teach children about their condition. Aside from being an adorable bear, Jerry is almost a large Tamagotchi afflicted with diabetes. Children can physically interact with Jerry and feed him a variety of foods that he holds in his backpack. They then can monitor his blood glucose values on an LCD screen in his chest and administer glucose to see the effect it has on Jerry’s blood glucose values. Jerry succeeds in being both fun and educational for children to use and its efficacy can be rooted in much of its smart design.

Jerry is excellent because it repackages the concept of diabetes into a recognizable and safe symbol of childhood comfort: a teddy bear. It provides children an interactive medium through which they can understand their illness and explore freely. Children literally can grasp the concept of diabetes in their hands and play/learn at their own pace. Children can interact with Jerry in the ways they deem important to them to understand and Jerry will give them immediate feedback on their actions with his voice and LCD panels. The immediate feedback and Jerry’s supportive reactions to the child’s effective management of his diabetes is a great source of intrinsic motivation. Jerry ultimately symbolizes the child’s own illness but gives them the personal power and agency to effectively manage it.

Jerry’s great design is also testament to understanding the problem of adjusting to diabetes, which Aaron himself had gone through. He thoroughly understood the issue and was able to design Jerry accordingly. Jerry’s immediate feedback, safe interactivity, and innate understanding of its user through design is great use of effective gamification design. Currently, Aaron and his other co-founder Hannah Chung are currently completing their initial seed funding and are in process of creating similar interactive toys for those with asthma and obesity.

Jerry is available for pre-order with a variety of bonuses and is expected to launch in Febuary/March of 2013.