At GCo, we believe it is important to engage and support our gamification community so that we can grow, not only as a community, but as an industry as a whole. Today I would like to share the story of dopaWin, a rewards platform based out of Estonia. If you would like your organization or gamification product to be featured, please shoot me an email at ivan@gamification.co

Behind each great idea there is a story. The story of dopaWin goes back to late 1980’s, when all electronic games in Soviet territory were being produced by one company, called unsurprisingly, “Electronika”. 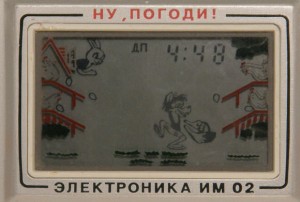 Back then, every kid  dreamed to put his hands on the first Electronika with the black/grey monitor and four action buttons. The wolf on the screen had to catch eggs produced by four chickens; the more eggs you caught, the more points you received. There was a rumor saying that if you completed the game, you would get to see a cartoon. Imagine what an incentive it was for a child, whose only chance to watch a cartoon on TV is limited for 30 minutes per week (no VCRs, or even comic books back then).

One of the founders of dopaWin spent more then a year to complete this game and finally succeeded one morning. After the highest possible score was reached, the game just looped back to the start. No cartoon, what a surprise!

We believe that time spent playing games can be transformed not only into intangible assets in the way of dopamine injection, but also as way of bringing real tangible value in the form of a service or product you can win.

dopaWin is where this can happen. It brings together game developers, gamers and companies, who are looking forward to market their services or products through a new channel. It is a win-win situation for all. Game developers get more gamers. Gamers get the chance not only to play more games, but also to win real tangible goods. Companies get to market their services and products to a huge target group, which can be converted into customers.

dopaWin’s challenge is to balance the interests of all three groups and make them happy and satisfied with this new integrated medium We imagine ourselves as a hostess, who is throwing a party for his/her friends, but who are strangers to each other, and wants them all to have fun and return to each other for future friendship and interaction.

Gamification in our view is all about motivation and reward. If you are motivated to compete for a reason, but not satisfied with what you got when reaching the result, then it is not fun anymore. dopaWin makes the game rules clear. There will be a cartoon, when all eggs reach the basket.

For more information about dopaWin, check out their website and get a sneak peek at their upcoming platform.