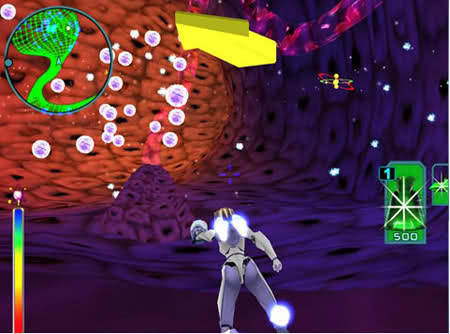 Kids like using video games to fight bad guys.  Now Re-Mission 2, a new release from the nonprofit company HopeLab, is helping kids do something much more important: fight cancer.

Re-Mission 2 is a follow-up to HopeLab’s highly acclaimed first-person shooter, Re-Mission.  Re-Mission 2 is made up of a suite of 6 games modeled after more casual, addictive games like Angry Birds or Bejeweled. Designed to be played on computers or smartphones, each free game depicts different ways of fighting or treating cancer.  For example, “Nanobot’s Revenge” lets players protect lungs and blood vessels from tumor-building baddies by shooting them with Radiation Beams or Molten Scalpel Blades.  “Feeding Frenzy” lets players navigate nanobots around the bloodstream to block bacteria colonies and cancer cells, and “Nano Dropbot” involves dropping Chemo Bombs on cancer cells while rescuing healthy tissue.

Of course, the games themselves don’t fight cancer, but they do help create an environment where medical care can be more effective.  A 2008 study found that patients who played games in health such as Re-Mission were more likely to comply with treatment, including taking medications regularly and understanding how their own behaviors could impact their treatment.  Players indicated that the game helped them feel supported and helped them feel that they had some measure of control over their treatment.

Game developers say that patient engagement is particularly important in treating teenage cancer patients.  Teenagers may comply with treatment while in the hospital, but at home their desire to be “normal” may encourage them to make compromises or skip taking their medications.  Playing the game helps patients understand the importance of consistency in complying with their treatment plan.

Admittedly, the game isn’t for everyone.  Some patients may not want to think about their cancer or what’s happening inside their bodies, but the game provides a helpful outlet for those who do play.  Feeling that they are somehow fighting their cancer—even in a video game—can help patients renew their sense of hope.  Re-Mission 2 doesn’t fight cancer, but it and other games in health are important tools for kids on the frontline of the battle against cancer.