When facing an engagement crisis, companies can turn to gamification to help invigorate user interest and participation. As the top cheerleader for the use of gamification, we’ve encouraged this phenomenon and have tried to lead companies to answers for their engagement needs through our articles and GSummit events, but always with one essential caveat: applying game mechanics (such as badges and point systems) in a thoughtful way can incentivize user behavior to coincide with the company’s goals, but it will not make a product appealing on its own.

“A Google A Day,” is a user engagement effort by Google (still in beta) to educate users about Google’s search functions and promote Google+ .

Despite being found in the Games section, the new trivia game represents a great use of gamification tools. It remains to be seen how it will help increase engagement with Google+, but it’s a great start.

As explained in the preceding video, “A Google A Day” is ostensibly a trivia game created to make using Google as a resource an acceptable part of playing trivia instead of a form of cheating. Players are asked a question based on a category of knowledge, and they have to answer the question before time runs out, losing points the longer it takes. To find the answer more quickly, there’s a convenient Google search bar located just beneath the answer. The game stops at about ten questions, including a locked bonus question, leaving the player wanting to return the next day to play another round and not overwhelmed with the time constraints of a never-ending game. A cute surprise and delight feature occurs for players who reach the end of the daily challenge  (a surprise I won’t ruin here).

Players have to log into Google+ to collect their badges and points and are encouraged to share their badges with their friends on the Google+ network. Players who share their achievements with their network become versed in using Google+’s circle features. Players who explore AGAD’s help features will find guides to better search techniques, for example how to use Google’s calculator more efficiently. As players practice searching “against the clock,” they are incentivized to search smarter to find answers quickly, and practiced over time these skills can carry over to when players are using Google to research a school report or find a nearby restaurant quickly. (One trivia question forced players to look for a restaurant in Los Angeles that served French Toast by asking them about a specific event which took place nearby).

In terms of how we recommend individuals to implement a web-based gamification system for their app, Google has created a model system that others learning gamification design can follow. I love the badges (you get alot of them when you answer correctly), and the simple yet playful, colorful, yet clean design we’ve come to expect from Google. The user interface does not overwhelm with a garish display of too many buttons that I’ve seen in some systems. The game reward users right away. The rewards for a “new high score” and the encouragement to share it is an easy, simple way to keep users engaged. The locked bonus question is very cool – (it includes a multi-colored spinning wheel to choose the category) and the encyclopedic goal is a fun goal to strive for.

The point system is great. You start with lower points-earning potential and increase as you move through the game. The sounds and the rapid visual showing your points increasing vastly when you get a question right makes the user feel great and encourages use.

It feels infinitely better to know the answer to a trivia question without having to search, or to figure it out without needing a hint or a clue, but Google mercifully provides both of these for players when feeling stumped. If a player sticks with the question long enough to find an answer they will eventually learn something new, even on the most challenging and obscure topics. This could make “A Google A Day” an excellent resource for classroom educators, perhaps early in the day as a way to fire up sleepy brains, or as a reward for sitting through a state mandated curriculum at the end of a long school day.

However, if there’s any doubt whether you’re being tested on general knowledge or Google’s functionality, let it be settled here: I was asked a question about an area of the New York City block I live on, and was almost stumped by the question because the answer was a nickname which is hardly ever used by locals. If a non-local ever wanted to find it, they’d be forced to search and figure out what to look for.

This is a game which has something to offer all four player types, but obviously Explorers will get the most out of it. I attempted to challenge two friends and use the game’s “challenger mode,” and was able to get them both to log into Google+, but the game either wasn’t working, or wasn’t intuitive enough for users to figure out how to complete the challenge. Let’s hope this is something Google will fix in the future. The leaderboard doesn’t motivate without challengers.

Another issue is that when searching for answers you hit blogs that post the question for their users to comment on, so you might get the answer from them. This will allow players to come up with the answer faster, but it also feels even more like “cheating” than simply searching Google for the answer.

We know Google has been involved in gamification because they’ve sent employees to speak at and attend GSummit.

It is a great sign for the industry that the juggernaut of tech companies is looking to gamification to help engage their users. Even though they are the most visited website on planet Earth, Google is not resting on its laurels. They’ve created a great system. It might not make Google+ the go-to social network, but it represents a serious effort to have more users logging in and using it. 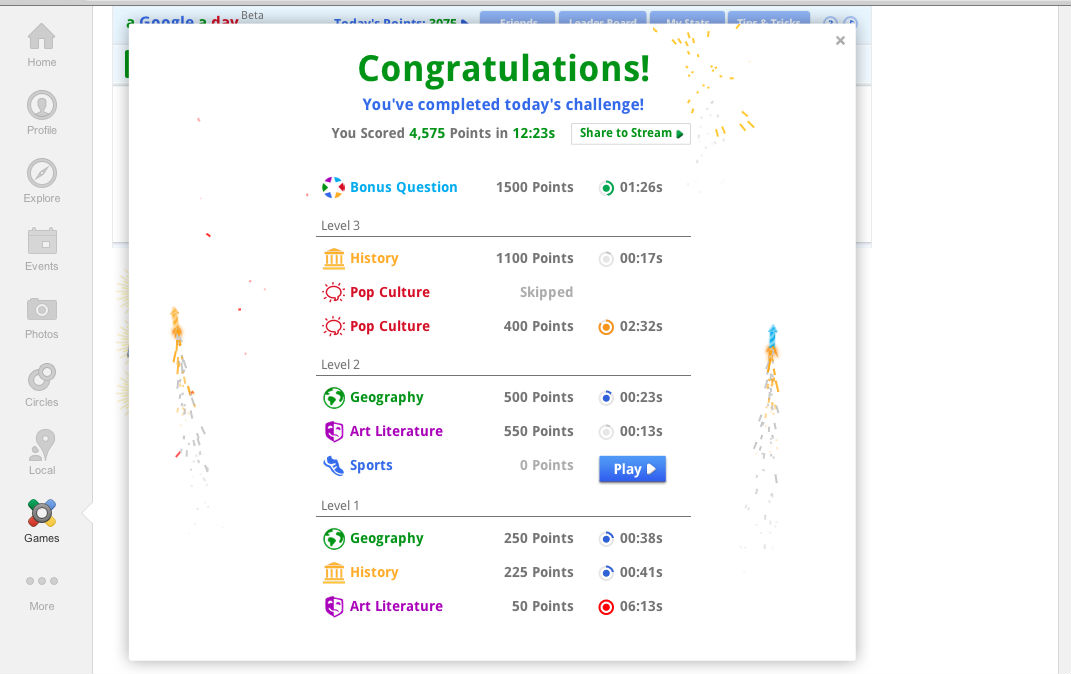