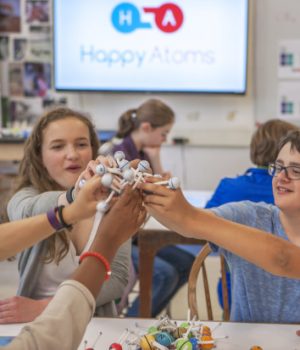 At this year’s Games for Change, Jesse Schell of Schell Games showed off his company’s newest idea for making chemistry more approachable for middle and high school students — Happy Atoms, a mixed reality, lego-like experience that asks people to explore atom formation through play. G.Co was fortunate enough to speak with Jesse last week about the game, its current crowdfunding campaign, and his plans for making chemistry more approachable to a wider audience than ever before.

Happy Atoms has been in the works for over five years; long before a prototype existed, Jesse had been thinking of ways to make chemistry easier to digest. Traditional chemistry classes were frustrating and difficult to learn from, and there was a need for a way to learn the subject more easily. To make these connections form in a more understandably way, Jesse tinkered around with a digital prototype of his vision — but this too had its limitations. The prototype had a hard time dealing with one electron at a time.

Physical models were more approachable, and tangible — students had access to tinker toys and other models, but these limited platforms made it challenging to really see how things connected. When Jesse thought of a physical model for expressing chemistry to students that incorporated digital components, things really clicked. There were moments of discovery when models were put together in a tangible space and later researched digitally to see if they made anything. The act of building a model in real life and testing the model on a computer created a deeper sense of understanding, and, more importantly, fun.

With a department of education grant in hand, Schell Games went on to manufacture a larger print run with the help of Thames & Kosmos, a leading publisher of physical toys and kits geared around science and education. Through their partnership, they developed a model where electron snapping is innovative, intuitive, and easy. Atoms connect through magnetic tips on the ends of rubbery “arms” that extend of out the atoms and fit into magnetic bonding sites on other atoms. This process represents how electrons (the tips) bond with empty spots in other atoms’ electron shells. With a few snaps, anyone can create a molecule that actually exists. 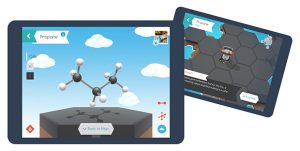 To check one’s work, all the models can be scanned into an app, which will inform the creator of the resulting molecule that they made. After the molecule is discovered, the app gives additional information about it, such as its name, its structure and its composition. The overall direct goal of the game is to make models in the real world with the physical atoms and scan your creations into the app to see what you’ve made in an effortless, seamless way.

The experience of designing Happy Atoms has not been effortless for Jesse, however. To create Happy Atoms, he’s had to make a few concessions. Chemistry is complicated because of the ways things connect, and sometimes, it can be beyond our ability to model it at all. As you start modelling, you can run into exceptions where models generally work, but a few corner cases don’t. Chemistry experts can be susceptible to perfection — if a model isn’t perfect in every situation, then it’s widely not viewed as an accurate model.

Jesse argues that the purpose of a model isn’t to be accurate; rather, it’s to give insight. A universal modeling decision is difficult, and because of that, it is difficult to find the “right” way to look at something. Regardless, these corner cases have caused interesting design decisions, such as the choice to leave out more common elements like Boron and Aluminum out of Happy Atoms. 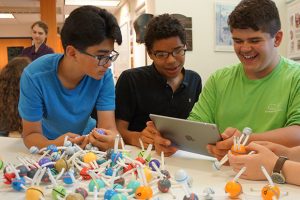 Despite these challenges, Jesse has big plans for Happy Atoms. Schell Games has received great feedback and is already working with schools to test the game’s effectiveness using lesson plans specifically created for teachers to integrate it into classrooms. Jesse envisions a popularity like the levels of Minecraft or Lego Mindstorms, where children get into it, want to go deep into the experience, and engage with the game on a level similar to how students engage with robotics or other hobbies today. Happy Atoms is Jesse’s vision to get young children to fall in love with chemistry, and to begin to cultivate a long term commitment to the science.

Happy Atoms is expected to launch this fall. For more information, visit its crowdfunding campaign or website.