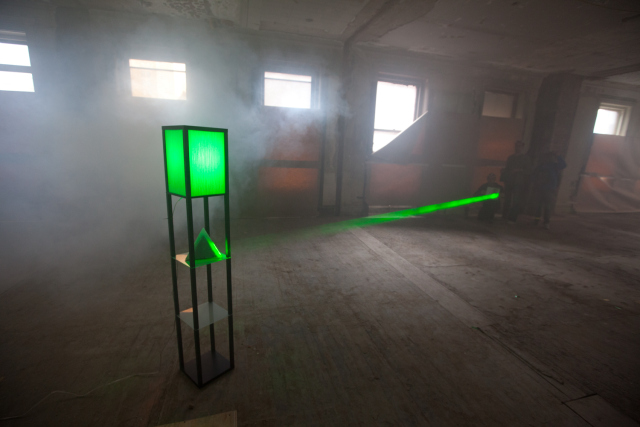 With the simple rules “do not tamper with the clues” and “no private motorized transport”, 20 Goldman Sachs employee teams armed with bubble gum cards, a seating chart for Kevin Bacon’s wedding, a plastic cube, and a three-stanza poem all competed to win the scavenger hunt Midnight Madness.

Originally founded in 1996 by Mat Laibowitz and his Columbia University friend Dan Michaelson, these teams of NYC based financiers and some of their friends took to the streets to decipher clues to win the hunt – all for charity. For almost two days, these contestants live in their own reality solving puzzles that would make even Sherlock Holmes or the most hardened gamer cringe.

The words “fun” and “exciting” don’t always come to mind when dealing with finances, but the scavenger hunt clearly did that. Some of the puzzles involved lazer mini-golf in an abandoned building and using an iPhone app to change the color of the lights on top of the tower at One Bryant Park – a sight many people must have seen.

Essentially, the entire landscape of New York City was gamified for a few hours.

There is no fantasy nor any sci-fi here; players still use the city and interact with people as they usually do, just with a slightly different tone overlapping everything. “As soon as you enter the game zone, the texture of the city changes for a few hours,” says Michaelson. The players are still themselves during this event, and NYC is still NYC – but with a changed sense of reality for a while.

After a brief hiatus due to monetary concerns, Elisha Wiesel, a Goldman Sachs partner came up with a solution – instead of charging an entry fee, he would launch the project as a non-profit fundraiser for Good Shepherd Services. The initial costs of $270,000 were covered by Goldman Sachs’ philanthropy fund, and all $1.4M of donations received provided training to high school dropouts who needed to finish their education. “I wanted to be able to tell donors that every dollar they donated would go to the charity and not to operating costs,” Wiesel said.

So, who won? The Global Securities Services division, even with their handicaps of no bicycles, one laptop between 10 people, and no previous Midnight Madness players. Team co-captain Igor Modlin explained “We are in a customer-facing business–our job is to help clients solve complex problems. The key is we work well together.” Communication and teamwork were the keys to victory, not overthinking and an abundance of resources.

And having fun. Having fun probably helped too. I’m certainly jealous of this event.

Win or lose, those at Goldman Sachs who rejected reality to substitute it with their own (bonus points for catching the reference) can look back on this at the fun they had, the new technology they used, and the better sense of camaraderie they surely obtained.

Can you think of any other companies or fields that could benefit from a game like this, or could do it better?