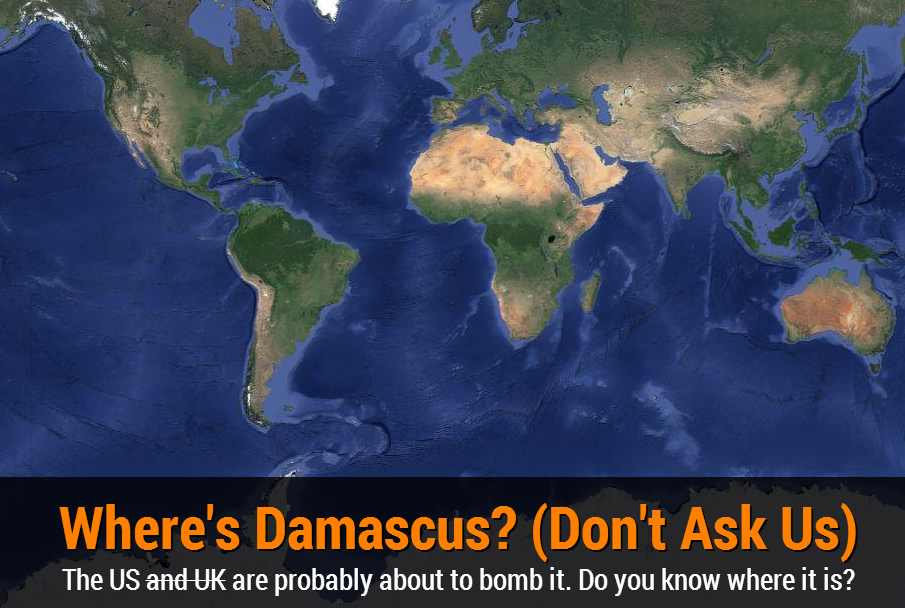 That was a recent tweet by Chris Albon, a well-known political scientist and coder who writes about using technology for social good. Albon was referring to “Where’s Damascus (Don’t Ask Us)”, a game created by a new little start-up called UsVsTh3m. UsVsTh3m is funded and incubated by UK publisher Trinity Mirror, which like many of its peers, is trying to create new revenue opportunities.

There’s a variety of content on the UsVsTh3m website, one category of which is devoted to games. Aimed at an 18-30 year-old audience that seeks out funny content on the Web, UsVsTh3m is described as a “mobile-first, social sharing digital experiment”. UsVsTh3m also, very interestingly, uses Tumblr as their publishing platform and wants to attract an audience that it doesn’t normally reach by producing topical content that people want to share.

Where’s Damascus (Don’t Ask Us) is a very simple game that lends itself to viral uptake because it is funny and timely – based on current events. Only launched at the end of May, UsVsTh3m saw 464,000 unique visitors in June and 750,000 in July. While these numbers are not broken down for games and Where’s Damascus (Don’t Ask Us) specifically, it’s probably not a stretch to say that UsVsTh3m is on to something quite interesting.

How does the game work?

The Where’s Damascus (Don’t Ask Us) site is a map of the world. The user hits “start”, which then asks the user to locate (it’s not too precise) their home  on the map. Next, the user is asked to locate the marker on Damascus. The game then calculates the the user’s score and compares it to the last 500 players. If the user’s score falls below a certain percentage, the game answers “You Can’t Find Damascus” (which is pretty funny). If the user scores above a certain percentage (not clear), the game answers “You’re on the road to Damascus”. The game then allows the user to post  their score to Twitter or Facebook. The whole game takes about a minute to play. They also did a follow up blogpost outlining some data about the first 500 players of the game, which led to them finding out that only 57% of people in the Department of Defense actually  know where Damascus is.

While UsVsTh3m has not yet leveraged its audience to monetize, it plans to introduce a native advertising solution down the road. Imagine the kinds of global partnerships – and engaging reward features – that could be created around Where’s Damascus (Don’t Ask Us). Mobile, travel, food, music, art, culture and education would be just the start.

So a game that essentially pokes good fun at a user’s lack of geographical knowledge could be the inspiration for change – in how people view the world and their relationship to it. The person who can’t find Damascus today might tomorrow become a traveler to Damascus, who then decides to study the country (in this case, Syria), the culture, and the language. That user might use their knowledge as a teacher, a diplomat, a doctor or an MMO game developer. In a world where many people can’t locate many countries on a world map – until their own country is pulled into a conflict – wouldn’t the chance to expand one’s own horizons be the best reward of all?

What do you think?

Can YOU find Damascus?