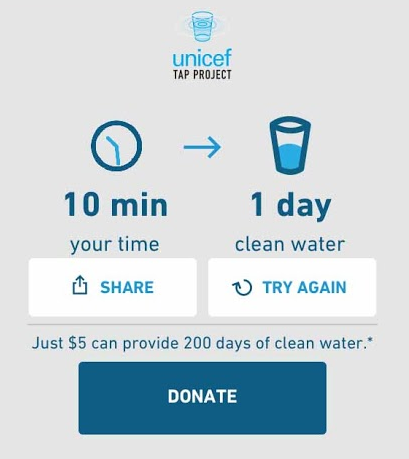 Set Your Phone Aside and Save a Child’s Life

This year, the campaign for UNICEF’s Tap Project is challenging us to set our phones aside for a few minutes in exchange for a clean water donation. Just to give you an idea of the challenge: spending a mere 10 minutes away from your phone provides a full day of clean water to a child in need. The longer you go, the more water is donated.

“Some of us can’t go for more than a few minutes without checking our cell phones. Imagine what it’s like to go days—or longer—without safe drinking water” says Caryl Stern, President and CEO of the U.S. Fund for UNICEF.

The message behind the project is that as we participate, we stop and reflect on how dependent we’ve become on checking our phones. Our constant need for checking cell phones nearly mirrors our vital need for water itself.

We feel at an disadvantage without those little devices, but it is obviously different from the disadvantage of someone who doesn’t have access to clean water and yet they’re nearly treated the same way in this country.

Experiments like these are necessary in order to pull ourselves out of our technological bubbles, and overcome the fear of missing out (FOMO), which is the belief that a major happening or opportunity will pop up in the times you are not looking at your phone, therefore, the “missing out” fear.

We covered a similar project by Amstel, rewarding phone abstinence for a free beer. Amstel’s and UNICEF’s projects are similar in that they both bring awareness to how much time we spend staring at our pocket screens, but the difference is that UNICEF’s project doesn’t require an app to be installed, and instead of giving you a beer as a prize for eight long hours away from the phone, it injects meaning to the smallest of your efforts by showing you the massive difference it is making in the web app’s screen.

But how do they monitor if no one is cheating? Well, UNICEF’s web app actually monitors your phone! First, you open the page uniceftapproject.org  in your smartphone’s browser and press “Begin”. Time will then start counting but you’ll need to lay your phone down on a surface (since it won’t work if you are holding it) And that’s it! 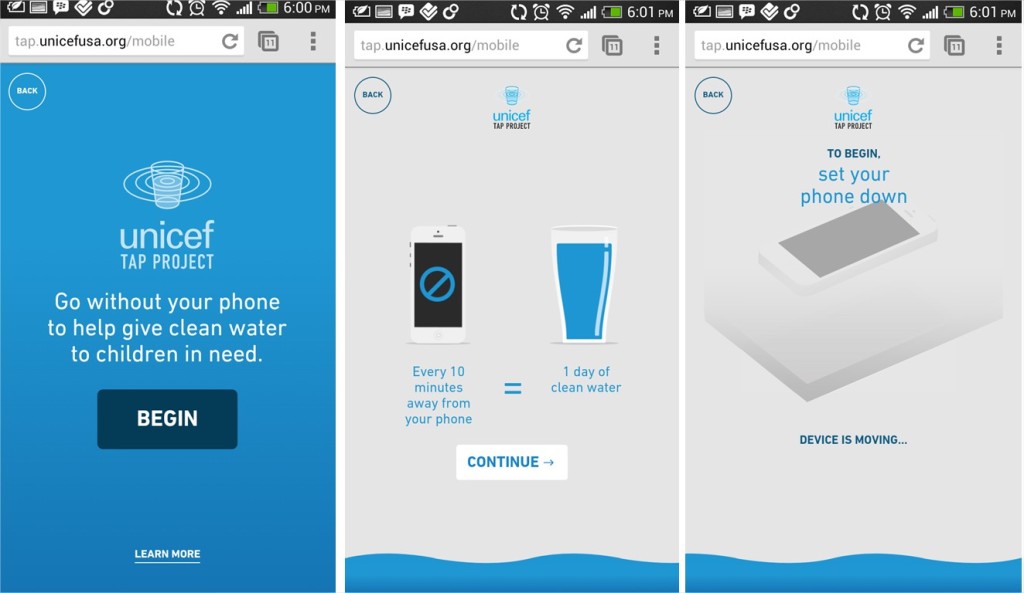 As the phone sits untouched, messages will pop up encouraging reflection about the cause behind the Tap Project as well as clever doses of incentives like records of abstinence in the world, in the state you are in, and how many people are participating along with you. And when you are done with your phone abstinence, simply pick it up (skip the 10-second continue) and it will stop. You can then share the results of your effort on Facebook and Twitter.

Here’s how the campaign handles the conversion of time into water:

The sponsor behind this project, Giorgio Armani, will donate the equivalent of one day of clean water to a child in need every time a user in the UNICEF web app goes 10 minutes without touching their phone, up to $75,000. According to UNICEF, with just one dollar, a child receives water for 40 days. That’s the equivalent of $0.025 per day. So if we reached the maximum pledged by the sponsor, it will allow for 3,000 days of donated clean water, which is more than 8 years!

I think this campaign succeeds in encouraging us to go beyond the 10 minutes, and we’ll probably get some great statistics at the end of it. The designers wanted us to feel in the shoes of those people in need by keeping ourselves from something we’re currently taking for granted, and I think they did a good job. We should enjoy more face-to-face conversations, appreciate body language and ask ourselves more often, how can we manage the fear of missing out? Besides raising awareness to this matter, this project works well as an alternative for traditional donation methods.

For another gamified donation practice that requires only a little bit of our time, check out the Free Rice project, an initiative that helps end world hunger.

You can also check out UNICEF’s campaign video for the Tap Project to learn more: