Over the course of the last 15 years there has been a great amount of debate about how video games are shaping the minds and behavior of young people. Video game addiction has become a prevalent concern, and some researchers suggest impressionable adolescents may be driven to brutality by the violent fantasy world of video games that they immerse themselves in.  If you’ve ever wondered how exactly video games affect adolescent brains, here are some basics:

Dopamine, a feel-good hormone and neurotransmitter, is naturally occurring in the brain and might be largely responsible for reward-driven behavior. According to recent studies, those who play video games have high releases of dopamine as they play, similar to if they were to take a synthetic drug.

Researchers believe that the neurotransmitter is released because video games are reward-motivated. That is, adolescents play with the intention of gaining a reward, be it advancement in the game, rising up a ranking board or badges and trophies. 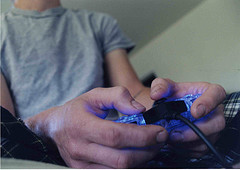 Video Games May Be Considered An Escape

Since the early days of video games, many researchers have warned that video games may negatively impact behavior. In the 1950s, some argued that young children should not be allowed to partake in video games and similar stimuli because the activity only exercised certain portions of the brain and could, potentially, lead to the underdevelopment of the portion of the brain responsible for behavior.

Currently, researchers are finding that video games, specifically those that immerse teens into a fantasy world, are being utilized as an escape from life’s harsh reality. For example, these games are particularly popular with teens who are less socially developed than their peers.

Oftentimes, video game addictions grow out of this desire to escape. While there is no solid evidence linking playing video game with violent tendencies, researchers warn that socially isolated teens who immerse themselves in video games may be struggling with deeper issues.

Simply put, no, not necessarily. Video games, just like any other activity, is best if used in moderation. In fact, there are some very positive attributes to game playing. Video game, as argued by proponents, can help a young teen develop a greater sense of self and help to hone problem-solving skills. Games that offer an “open world” concept are particularly good for developing better problem solving skills, say gaming enthusiasts. Research has also found that video games can help with visual perception, and may also help kids develop task management skills, particularly multi-tasking.

Overall, researchers suggest that there are good and bad attributes to video games, specifically for adolescents as their brains are still growing. Researchers argue, however, that banning screen time isn’t the answer to dealing with the problem of potential game addiction. Rather than that, researchers suggest that boundaries need to be set, and parents need to be actively involved in the life of their teens, both in real life and in the game world.