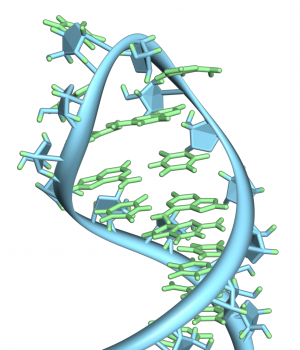 A game called EteRNA is being used to further research into how RNA folds itself into particular shapes. The game is a way of crowdsourcing the modeling to free biomedical scientists to use the shapes for their research.

Recently medical researchers have become interested in the role that RNA has in the human body and the management of diseases. RNA molecules start out as single chains of subunits that quickly form into a stable shape. The shape, determined by the sequence of the subunits, controls how the RNA molecule interacts with the cells of the human body. If medical science were to acquire a better understanding of these shapes, a whole new host of targeted therapies could be developed that will treat cancer and other diseases.

However the shapes RNA resolves itself into can be complicated and are governed by rules that are not well understood. Medical researchers do not have the time or the training to create RNA shapes. Computer modeling has proven to be inadequate as well.

The beauty of EteRNA is that one does not have to have any biological training to play. All one has to have is the ability to solve complex problems, which a lot of gamers have in abundance. The top designs to come out of the game have been used at Stanford University to synthesize RNA molecules where they could be evaluated at that institution’s biochemistry lab.

The game has resulted in a number of scientific papers, the most recent one written by three of the gamers. The paper, published in the Journal of Molecular Biology, discusses how most RNA molecules created in the game are symmetrical.