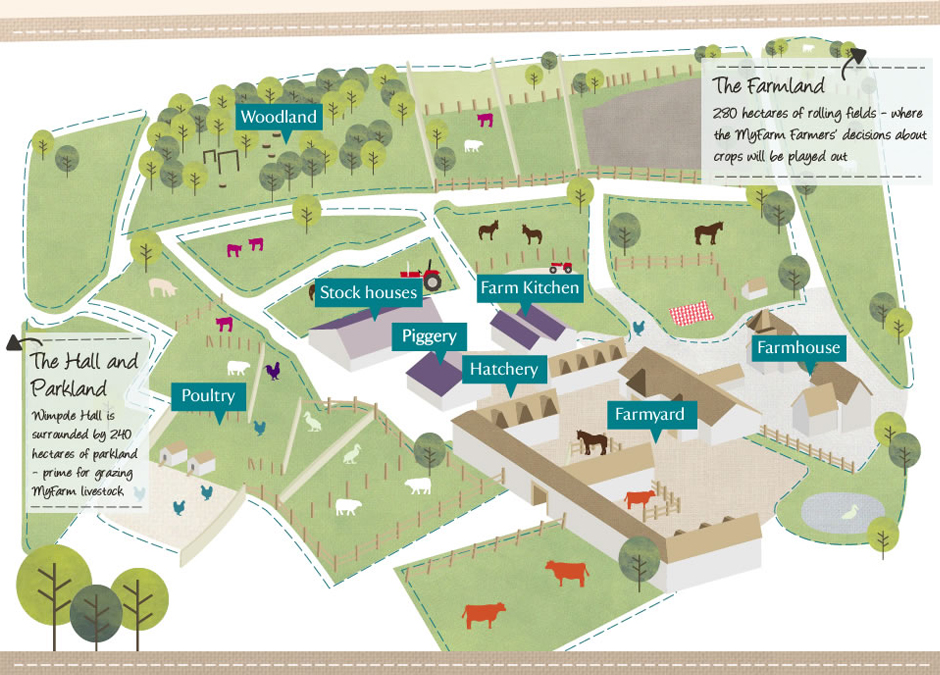 Think about the last food you ate for a moment. Can you fully describe where it came from before the supermarket, vending machine or plastic package? How was it grown or raised there? Chances are it’s quite the challenge for most of us. It’s no secret that in our modern existence, urban dwellers have grown considerably apart from the realities of the farm. MyFarm seeks to change that.

MyFarm’s goal is to involve 10,000 online users in the logistics and details farm, if not the dirt. Farmville this ain’t–MyFarm connects users to a real farm in Cambridgeshire, part of the Wimpole estate run by the UK’s National Trust. An initial subscription fee of £30 (about $50) goes to support the project, and grants the user access to both the website and the real-life barnyard. Most importantly, though, it qualifies the “Farmer” to vote on how the farm should actually be run. The first major vote–what to plant–was just won yesterday by wheat (over oats and barley).

For every decision about the farm, a question is presented at the beginning of the month. Over the course of the poll the potential voters are given information on the topic at hand through videos, interviews with outside experts, and links to outside information. The website also provides room to debate amongst the membership. At the end of the month, the votes are tallied and the users can watch the decision being implemented. Over time, they’ll get to see the repercussions of their decisions play out through the farm’s team updating the website with both text and video updates. The goal is to create a profitable farm–the secondary goal is to demonstrate to users just how difficult and complicated it is to run a profitable farm.

MyFarm is an interesting example of gamification through two aspects. On the one hand, it collects the wisdom of the crowd in making its major decisions; on the other, much of that wisdom is previously unknown to the crowd–taught to them, in fact, by the website itself. It’s part crowdsourcing and part education, teaching the members about issues and then getting them involved in decisionmaking with that information. Hopefully it will result in a thriving farm and a thriving community of informed online Farmers.