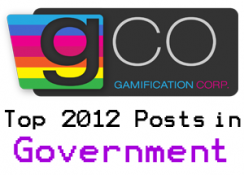 To kick off 2013 in style, we’re reviewing some of the top articles at GCo for each of our five categories of Government, Social Good, Enterprise, Education,  Consumer, and Expert sections. Click on through to see some of our top moments for gamification in government in 2012.

Do you think most of our potential military recruits can be found playing Call of Duty of right now instead of serving our country? The Air Force seems to think so and has created the Airman Challenge game to teach prospective recruits more about the Air Force and its available positions.

China’s experimentation with carrot-and-stick policies has produced an effective tax collection system with its implementation of a lottery receipt system to keep track of transactions and get businesses to pay their taxes.

Gamification Of Prison: Giving Reformed Inmates “The Opportunity To Be A Champion”

Burl Cain, warden of Louisiana State Penitentiary (aka “Angola”) used gamification to allow prisoners to level up to where they can compete for glory in front of thousands of fellow inmates at a prison rodeo.

MTV is using gamification as part of their latest election year outreach to increase youth turnout at the polls. Inspired by Fantasy Football, MTV’s Fantasy Election ’12  is a much better strategy for the music network’s Rock The Vote effort than, say, P. Diddy threatening to kill you. Here are 5 reasons why you should start drafting candidates before November 6th.