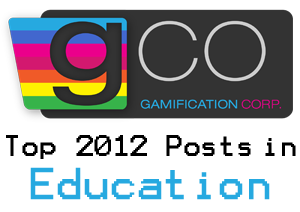 Behold! Gamification Co’s Best of 2012 series will conclude with the best of education gamification from last year. The education community showed intense engagement with these articles for here and I hope that these resources may inspire countless classrooms to change into engagement powerhouses for students. Read on about how some of Blizzard’s most popular games are education High School and College classes, an iPad app to train Autistic children, a classroom gamifying musical compositions, an interview with Kevin Werbach, Coursera Gamification Professor, and finally – a full six part series by an expert educator discusses gamification’s current role in modern education.

In the spring of 2009, the University of California, Berkeley offered a democratic education course titled, “Game Theory with Applications to Starcraft”, which took a theoretical and computational look at how battles within the game are conducted and on what basis strategic choices are made. While many may wonder how complicated a video game can possibly be, Alan Feng, the class instructor, quickly applied a variety of upper-level mathematical concepts including vector and matrix mappings, differential calculus, and finding levels of uncertainty using graphs in three-space

Apps for Autism: Using Game Mechanics to Learn and Grow

Yuan Kai, an art student at Edinburgh College of Art, understands the difficulties of Autism in day to day life. She has contributed designs to Find Me, a free iPad app that uses game mechanics to teach autistic children develop the skills to filter out distracting input and focus on social interaction.

“…you might say, perhaps because I’ve spent a good deal of time in the last five years performing the music of John Cage, the composer who blurred the role of creator, performer, and audience, revolutionizing everything he touched from about 1930 onward, from music to literature, philosophy to mushroom hunting, an “inventor,” as Arnold Schoenberg called him, “of genius,” and to many others a musical anarchist, and to me, a titan of modern art who pretty much — let’s just say it — gamified music”

“I greatly respect Werbach’s approach to teaching gamification and his dedication to actually playing games to see their inherent values for gamification. In an attempt to learn more about his perspective, I got the chance to speak with Professor Werbach during the semester to get his thoughts on gamification’s place in our students’ education”

World of Warcraft in the World of Education

Lucas, a high school teacher, is an avid WoW gamer outside of his education world, but began to make connections to his classroom soon after he began playing. This hands-on, unique approach would make this an effective way to teach students with special needs.

This is a series of posts on the role of gamification in modern education by Andrew Proto. Check out the whole series with: “Part I: the Unique Obstacles Teachers Face“, “Part II:Technology’s Role in a Gamified Classroom“, “Part III: The Importance of Motivation“, “Part IV: Looking at Busy Work“ , “Part V: Gamification in Action“, “Part VI: Taking it to the Next Level “

And a happy farewell to 2012! If you liked any of the content in the Best of  2012 series, leave a thought below and we’ll bring you more of the content you wish you see.