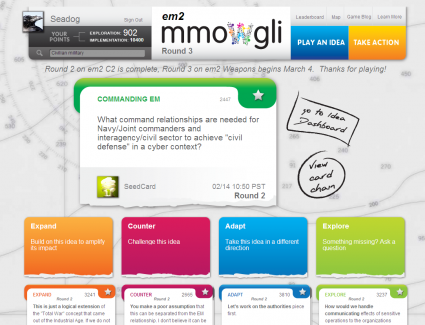 The acronym makes me picture an old Admiral with a monocole saying “Ah yes, we need to use the internets!” but the game is being used for more than just a little “war game”.

MMOWGLI is a new game by Office of Naval Research (ONR), Naval Postgraduate School (NPS) and Institute for the Future (IFTF) designed to crowdsource solutions for some of the Navy’s current problems.

Based on the elements in this screenshot, the game seems to allow people to propose ideas to a group of participants. Players can then either expand, counter, adapt, or explore that proposed idea to create a new thread of discussion while earning points for providing relevant feedback.

According to the Armed with Science blog, MMOWGLI’s latest game asked players to ideate new ways for the Navy to utilize the electromagnetic spectrum. The game allows military and technical experts in the field to engage in an open discussion on the topic of electromagnetism, which concluded after two days and has resulted in over 3600 discussion cards with new strategies and execution plans to improve the Navy.

“[The Navy] is in the unique position of being able to take unrefined new ideas, get subject matter expert evaluation and input, develop them through experimentation and pass the well formed ideas to the organizations who can put them on the path to implementation.”

If you would to serve your military with some gamification and innovative thinking, you can join the next round if you have a .mil email address. Details of the next round of MMOWGLI have not been yet announced so keep up with their Twitter @MMOWGLI for their latest announcements.