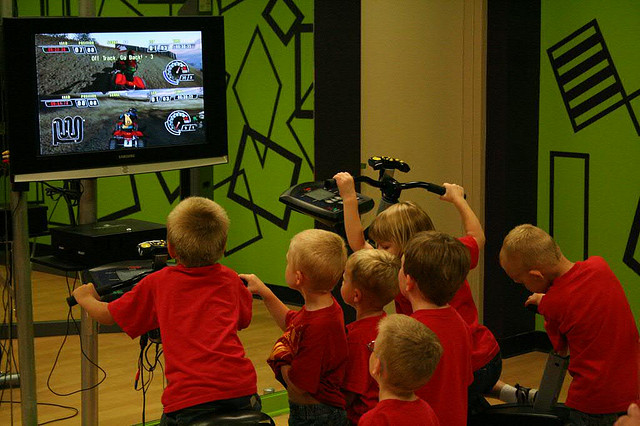 Even if you deny your participation with the plastic instrument fad with Guitar Hero and Rock Band in the late 2000’s, everybody had a taste of how awesome it was to be a fake rockstar. The toy instruments sure didn’t make anyone into a musician but what if these same mechanics actually helped you run or bike more? That’s a much more feasible prospect to accomplish.

Guitar Hero co-creators Kai and Charles Huang have been quietly working on a series of game accessories that could be used on bikes, treadmills, and ellipticals in their new venture called Blue Goji.

These devices will allow users to both track their exercise data and control special mobile games that enhance and reward exercise. In an interview with AllThingsD, Charles Huang mentioned that these devices will be much more immersive and habit-forming when compared to traditional distractions like reading or watching TV — he says that these games will allow time spent on exercise machines to “go faster”.

The Blue Goji devices can be described as a small activity tracker that can clipped onto clothes or slipped into a pocket. The controllers are consist of two adjustable black bands with buttons on each side that are designed to strap on to exercise machine handles. There are also two baton-like devices meant for treadmill runners who want to access those buttons without holding on to the machine. All the devices communicate wirelessly with mobile devices through Bluetooth.

Huang stated that these games will actually be fun enough on their own to promote a greater desire to exercise. He said: “The objective is to make them so fun that you want to come back, and you want to play them, and fitness becomes a byproduct,”

The strategy of making “desired behaviors” a mechanic for playing games is one that is often used ineffectually in education games but remains as an interesting approach for health games and one I haven’t encountered before.

Activity trackers exist all around the board and there are games to go along with them but none of them appear to be exist as games with active screens and immediate feedback as you play.

Blue Goji will begin making games in-house but their ultimate goal is to create a platform available for outside developers and create mass market appeal for their product. They want to replicate the success of Guitar Hero but with many more games that can encourage more exercise.

Kai Huang also credited the Wii Fit for demonstrating the viability of motion-gaming for fitness applications.

Blue Goji has not yet release pricing details or images of their prototype product but their first bundle is slated to launch for iOS and Android for Q4 of this year.

What do you think? Is this the right approach to making really fun fitness games?