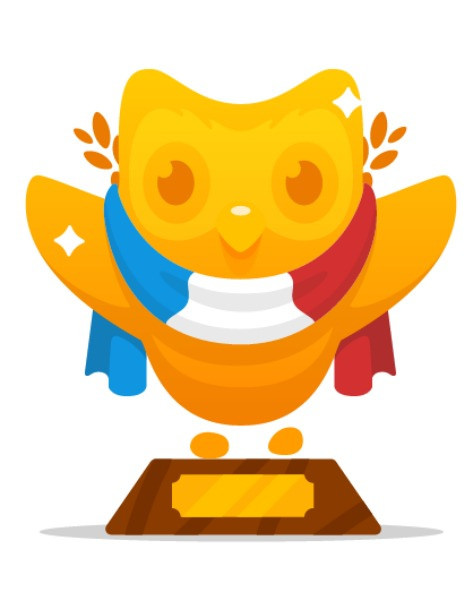 Duolingo has become a hot topic in recent reviews that underline both its pioneer path in the demonetization of online education, as well as its success rate since it first launched. Without a doubt, its gamified design plays a significant role in this success, which itself has obtained the attention of investors interested in its expansion. Duolingo is an online application currently available for use in 21 different languages, offering a free learning experience for 13 different languages.

Diving into its popularity, it is clear Duolingo uses gamification to engage its users. In some areas effectively in some others not so much, there are a variety of game elements implemented in its design, or so called, the pieces that put the system together. In the chart below there are six levels of game elements available to design any type of user experience. This sorting by levels is inspired by Víctor Manrique, who suggests it is easier to implement elements in lower levels than it is to implement those in the higher levels, which require more detailing in their design. The two elements highlighted in green contribute to Duolingo’s design in an effective way, while the one highlighted in yellow brings about room for improvement in the application design: 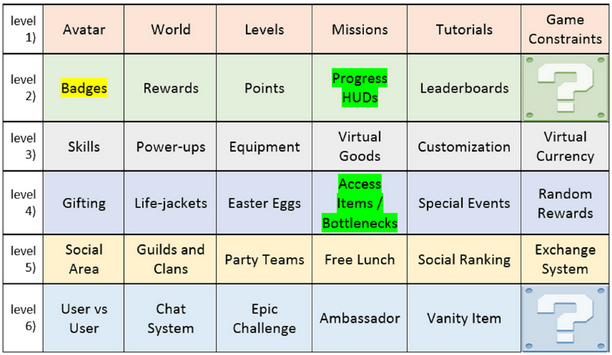 Within each lesson of each level along the learning experience, Duolingo makes proper use of progress Heads-Up Displays (HUDs), enabling a continuous feedback channel for users. Consequently, each student is up to speed of their own progress at all times during the path designed for each language.

As far as badges go, Duolingo is presented with a great opportunity for improving their experience with this game element, giving a boost to the app’s current success. In my own user experience, I went through huge disappointment at the unexpected end of a memorable day streak, using the app and studying the language every day as a consequence. I had reached over a 400-day mark! And then one day it was all over, and even today I wish there would be some badge on my profile representing such effort. But there is nothing to remember it by… Nothing, and back to square one on a day streak. It was such disappointment, that a whole month went by before I finally used the app again. Although it did not affect my intrinsic interest in learning French, it did have a negative impact on my pace and the level of motivation that had me coming back day after day, which is very important in this learning process. It makes sense to believe that both extrinsic as well as intrinsic are important motivation sources, the demotivation suffered in the absence of either one of them has deep consequences in the continuity of the activity, as important as it is while learning any language.

Based on the definition of a badge, we can conclude that Duolingo makes good use of them, with the above exception. Badges are valuable to users in terms of achievements, status and reputation among peers. They are also valuable to the community in terms of both individual as well as group commitment with an activity, their skills and mastery. Each Duolingo lesson is itself represented by a badge. It is possible to come to this conclusion, since it is not until you have passed a lesson that the badge becomes active, turning from gray into different colors. This activation goes also both ways, as the badge can deactivate due to lack of practice of the skills within that lesson. We can conclude, that Duolingo’s badges effectively stimulate the intrinsic motivators in relation to progress and mastery while learning a language. We come to a sensitive cross-point here, since it’s key to motivate the achievement over the badge and not simply obtaining the badge itself. However, when it comes to epic achievements such as hot day streaks, it is clear that Duolingo’s design fell a bit short. How could they not think about that, given the great opportunity for hitting some crazy records and demonstrating how committed users can be at learning a language? …I do not know. Luckily for me, the intrinsic desire to keep learning the language won the match and nowadays I keep practicing my French and learning something new slowly but surely.

In the preset learning path for any given language, Duolingo also makes good use of a level 4 game element, access items and bottlenecks allowing students customize their learning pace according to their skills in the language. Users may choose to skip lessons if they pass special quizzes that prove they have the skills expected at a certain point of the learning. In similar fashion, each lesson only becomes unlocked once the previous levels are all completed. This scores another point in favor of user autonomy, who is then able to choose which lesson to do first between those within the same level. 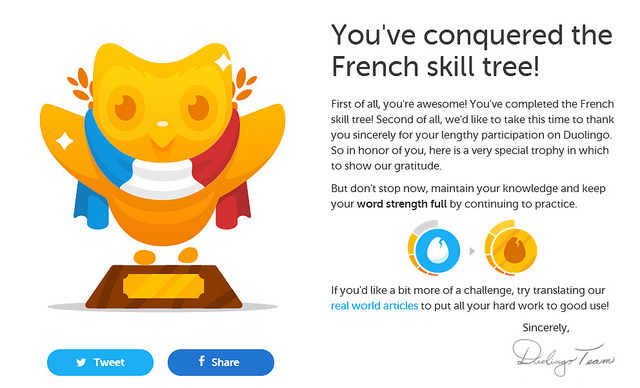 Duolingo is now moving towards education in school classrooms promising big achievements and further success in digital education. However, we must keep in mind that Duolingo is just one very useful tool in the language learning process. But just as in the case of building a house, one must consider using a set of multiple tools, so should one consider reinforcing a language learning process with other methods, especially conversational.

What other game elements in the chart above do you think Duolingo is using properly? Which ones could they be using incorrectly? Feel free to share your thoughts in the comments section.