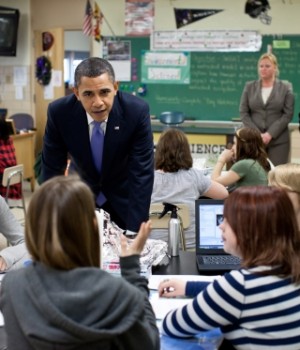 With recent incentive from President Obama, games in education are taking off anew. According to a recent article from Gamespot, the president has just initiated a $4-million plan called “Computer Science for Everyone” which may look toward game models as a learning method. To quote Whitehouse Deputy Director Tom Kalil, “Certainly video games are an entry point for some young people. The reason why some kids might get interested in computer science is because they like to play them, but they also want to make them.”

Video game companies are on board with timely new updates, such as Microsoft’s Minecraft. Their Minecraft: Education Edition is designed to update the older MinecraftEDU by offering new environments and interface features for building, as well as offering students the ability to work on their projects from home in addition to in the classroom. According to a January, 2016, article in The Guardian, one drawback of the new software is that it’s written in C++, which is incompatible with the older java script of MinecraftEDU. However, Microsoft is hopeful this won’t deter their loyal gamers too much, and they are counting on the new edition to become popular with brand new young users in classrooms.

Another viable piece of software is the latest edition of Classcraft, which is a role-play game designed specifically for use in the classroom. Classcraft won the 2015 National School Board Association’s Technology Innovation Showcase Award. According to a 2014 Venturebeat.com article, there were 7,000 children in 25 countries using Classcraft at that time. Educator Shawn Young, who uses Classcraft in his classroom, was quoted as saying about his students, “The second they get into class, they want to know what’s going to happen [with the game].” Our 2013 article explains the basics of the Classcraft premise. In the Fall of 2014, Classcraft debuted an edition that, according to The Journal, features “free iOS apps for iPhone and iPad; interactive forums; student analytics; customizable characters; and new Spanish, German and Dutch translations.

So if you’re a teacher and you remember enjoying “Where in the World Is Carmen Sandiego” and “Sim City”, then you are probably in a good place to lead your students into the realm of growing demand for updated gamification in the classroom.