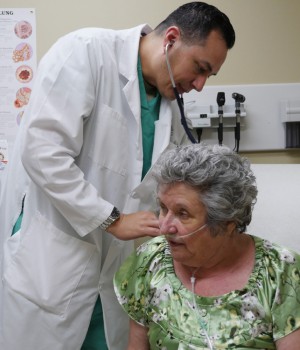 There are two schools of thought on the best way to help regain the muscle movement and dexterity lost by those who suffer a stroke. Some people believe that patients should not move at all unless in the presence of a physical therapist, according to David Putrino, director of telemedicine and virtual rehabilitation at the Burke Medical Research Institute. But the other, diametrically opposite view, holds that a stroke patient should move as much as possible. Putrino subscribes to the latter view and he found medical evidence to support that position. Dabbling with games in health care, he developed a video game with applications in physical therapy for stroke patients.

The game employs a small, hand-held motion-capture device that translates the movement of a patient’s hands into the movements of an airplane, explains Metro. Using the device, the patient must attempt to fly the plane through obstacles that appear on a tablet’s screen. As the patient’s hand movement improves, the game becomes progressively harder.

The Burke Institute conducted a six-week pilot study using the video game as stroke therapy. That study was originally intended to see if chronic stroke patients would be open to, and comfortable with, a video game approach to physical therapy. But the researchers also found measurable clinical benefit in those six weeks. Even more, the pilot study’s results suggest that the game brought about a patient response that encouraged them to keep playing the game in order to get better.

Putrino hopes to eventually bring the product into patient homes, where it could become a regular and routine part of the patient’s day. The researchers are also looking at expanding the game’s application to physical therapy for other conditions, such as cerebral palsy.

But researchers concede that expanding the game for use with young kids will require improvements in gaming technology. Putrino said that young kids, who are very familiar with the look and feel of modern video games, have higher expectations for their games – even if the game is for the benefit of physical therapy. But with this stroke research in hand, the Burke Institute researchers now have the foundation to build games with broader physical therapy applications.