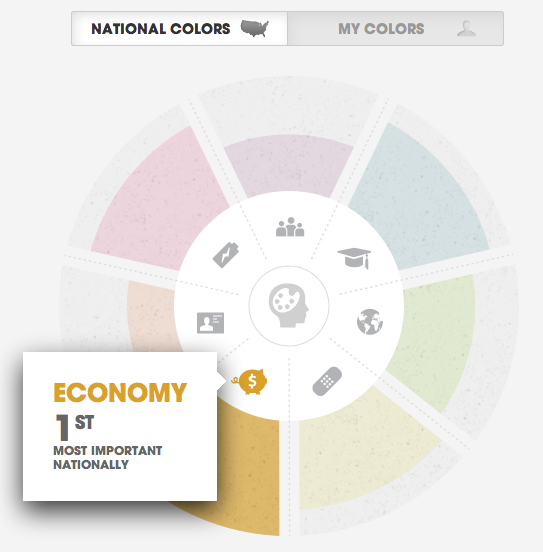 by Greg Caswell and Jeff Lopez Regardless of your political orientation, the last few months have been frustrating ones for American voters and citizens. The political system seems far removed from ordinary Americans; politicians are playing a game removed from the needs of many of their constituents because their primary goal is to win the next election; and the only option for a change-up will rely on a single alternative choice which some might not prefer at all. Americans Elect seeks to provide a third option. The organization aims to abandon a nomination process locked into byzantine party caucuses where states gain disproportionate influences, campaigns are fueled by vast ad budgets, and choice barely represents the views of the voters as a whole. Instead, the organization hopes to leverage the Internet to run a collaborative game with a very serious goal: to nominate a third party candidate.

The project will move through several distinct stages. In the first stage, which is just kicking off, the users will decide the issues that will form the basis of their eventual nominee’s platform. Each new user now is invited to choose what issues are most important, and the first inkling of badges and achievements are already in place. Eventually, top issues will be decided across the group through several votes and discussion fora. Once the issues are decided, candidates will emerge (an extensive background check will be involved), and another round of debating and voting based on their solutions will begin. The winnowing process is similar to other crowdsourcing platforms like MMOWGLI. Good ideas go forward, are commented on, and evolve. Bad ideas are sent away. In the end, just a few candidates will remain, and a final vote will take place to decide who becomes the candidate for Americans Elect. The name will appear on the ballet in 2012, right next to the traditional political parties.

Important problems remain in addressing politics with games. Games are often insular, and externalities must be taken into account. Andrea Philips, a game designer who has worked on large projects for HBO and Sony, lays out the issues:

“The problem with the gamification of politics, though, is that it necessarily results in the gamification of government, too. And government isn’t just a game, in the sense of an entertainment with no meaningful externalities. Government is the stuff of lives saved or broken, economies buoyed or sunk, wars fought or peace brokered. The stakes are high.”

While remaining mindful of these concerns, remember this is not the first time games have been utilized to achieve political ends. In the Democratic Primaries in 2004, Dean for America enlisted the help of Persuasive Games and lead designer Ian Bogost to create “The Howard Dean for Iowa Game”. Although solidly within the realm of serious games–you control an avatar to wave a sign, hand out pamphlets, and canvass door to door–the political goals were similar to those of Americans Elect and very real: to engage the population in civic action, personally take part in discussions, and ultimately cause them to get out and vote.

Gamified systems in civic and political action (such as Americans Elect and Commons) are much more meaningful than The Howard Dean Game, however, because they expand beyond the solitary, example-based environment of most serious games and incorporate real-world actions. Rather than run through the motions of political action, the system supports real action in helping players to identify problems, discuss the issues, and lay out solutions.

There is much to be said for the importance of a well designed and social–rather than solitary–system. Luckily, we have great examples from one of the oldest crowdsourcing games–democracy. The strength of Americans Elect is that it allows and supports real and meaningful participation in politics and lays the groundwork for direct participation in government, beyond simply simulating it in a virtual sandbox or an ivory tower.

The political aspects of Americans Elect have been making a splash in the news, but what’s most interesting to us is the possibilities it shows for a gamified platform. Regardless of his or her views, the final candidate will represent a tremendous victory for the concept of large groups tied together in a virtual environment. The concepts and tools for mass group participation found in discussing, voting, and moving forward rely heavily on gamification, and we can’t wait to see it in action on such a large and important scale.

Gamification Co will be hosting it’s second Gamification Summit in New York on September 15-16. Join keynotes from Gilt Groupe CEO Alexandra Wilkis Wilson and 42 Entertainment’s founder, Susan Bonds, to learn how the new science of engagement is rewriting the rules of product design. We are also offering the first ever Certificate in Gamification. For Gamification Blog readers, use discount code GCOBLOG for 25% off at http://gsummit.com/register. We look forward to seeing you there!