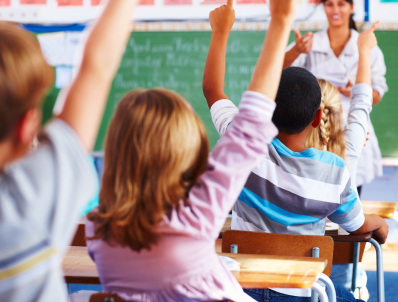 This is the fifth part of an ongoing series on the role of gamification in modern education by Andrew Proto. If you missed the previous articles, catch up with “Part I: the Unique Obstacles Teachers Face“, “Part II:Technology’s Role in a Gamified Classroom“, “Part III: The Importance of Motivation“, and “Part IV: Looking at Busy Work“ I recently had the opportunity to meet two teachers who had put together an amazing lesson for their class. While neither had heard the term “Gamification” before they’ve actively implemented many of the tools we’ve discussed. The results are nothing less then remarkable. Ms. Sunita Jodah teaches 3rd grade at P.S. 19 in Manhattan’s Lower East Side, and she had a problem. She was deep into a unit on mystery stories with her class and they weren’t really grasping what a “clue” was. With this problem in mind she went to see Mr. Rob Walsh, the school’s science teacher, and the two of them came up with a rather ingenious plan.

They’ve previously put together cooperative lessons that stretch across both classes but this time they planned something truly unique that the kids would benefit from and enjoy. Upon entering Mr. Walsh’s science class (immediately after Ms. Jodah’s literacy lesson) The students were informed that a group of scientists at a water treatment plant needed their help! Mr. Walsh went on to explain that for the last few days the intake valves were getting blocked and the scientists had no idea why.

The students were given samples of water, the tools they needed to test its pH, and a way
to test for the presence of sediment. They had learned how to use these tools in a prior class.
After they were done testing the samples, the students were also shown video taped “interviews”
with the scientists who were suspected in causing the lab to break down. Mr. Walsh had enlisted
the help of older students, casting them in the roles of the scientists. These vignettes held even
more clues as to who was at fault.

For Mr. Walsh this was a greatly rewarding lesson. With a simple narrative in place, he was able to show students concrete examples of many scientific skills, like: why scientific thinking is important, how to accurately measure fluids, why scientists need to pay close attention to detail, basic facts about the water cycle, and he was even able to introduce basic acting techniques to the older students who helped portray the scientists.

The lesson didn’t end in science class; once they returned to Ms. Jodah she lead them in “The Reading Game”. The Reading Game is a lesson that Ms. Jodah often plays with her 3rd graders, the rules are simple: If you can retell the story you get to level one, if you then have your own opinion about the story you get to level two, finally if the student forms a plausible theory about what will happen next in the story they get to level three. That’s it. No complicated badge system, no experience points, it’s barely a game at all. And yet Ms. Jodah’s experiences are amazing! Just by putting a few simple rules in front of the students and a clear goal for them to reach they are more motivated and engaged than they would be otherwise. It’s been so successful that she now also plays “The Math Game” with her class. Level one they get the right answer, level two they show their work, level three they explain what they did in words.

Often when we talk about gamification we get bogged down in mechanics and theory. Sometimes we need to remember that simple solutions may at times be the best solutions. What Ms. Jodah and Mr. Walsh put together was a fun and refreshing change of pace compared to an average lesson. The gamified principles were sound: by creating a story that was bigger than just their classroom they gave their students the feeling that what they did mattered on a large scale, by guiding them and allowing them room to work on their own Mr. Walsh gave them a sense of exploration and discovery, and by assigning clear win conditions and a level system for the lesson Ms. Jodah allowed her students a sense of agency and gave them an achievable chance at success.

A system like this could easily be put in to place school wide. You could use it to track and reward student behavior, attendance, and the amount of work done. All it takes is a bit of communication amongst teachers and the willingness to remember that learning can be fun. However, as Ms. Jodah was quick to remind me, “Everything we do must be purposeful”. Let’s make sure that me remember Game Mechanics are used to enhance learning. We can’t just implement them for their own sake

Correction: the author’s name was labelled incorrectly and has been updated to reflect Andrew Proto’s excellent contribution.

Andrew R. Proto taught middle school science for three years before going to work at Apple as a technology instructor. After teaching there for five years, he realized how much he missed his classroom. He is currently completing a Masters of Science in Early Childhood Education at Metropolitan College of New York. Follow him on Twitter @MisterProto