This Post Originated from Jon Guerrera’s Blog, Living for Improvement.

Those of you who saw me speak on goals and gamification in June know that I’m a big fan of using gamification for projects requiring large bursts of motivation that one might’ve had trouble finding otherwise. Since that talk back in June, I’ve been refining this gamification system with every use (mostly on smaller projects related to health). But then one day in September, a much bigger project fell into my lap: an opportunity to interview with Google. Working for Google has long been a dream of mine, so I immediately jumped on it.

This was an unbelievably great opportunity, but it was awful timing. I was in the middle of multiple projects, both at work and in my spare time. I had so much to do and so little time to do it. The thought of adding intense interview preparation on top of everything else was a recipe for an instant panic attack. But rather than curling up in a ball and freaking out, I thought, perhaps gamification might come in handy here? In retrospect, I can confidently say that yes, it did. In fact, I believe gamification was one of the main reasons I was able to secure the job – I wouldn’t have been nearly as well prepared without it. You see, the gamified system I set up for myself hit every motivational trigger to keep me practicing and preparing for my interview long into the night – long after I wanted to stop and go to bed.

So while I don’t want to divulge any information about the actual interview, since that’s probably sensitive information, I can tell you about the gamified systems I set up for myself to be insanely prepared on the day of the interview. And of course, my goal for today’s post is for you to be able to adopt this system for yourself when a great opportunity comes knocking on your door with incredibly short notice.

This is how my gamified interview prep system started (click the image to view it in full size):

As you can see, it started with the milestone/reward combo I’m so fond of – on post-it notes, of course – along with time tracking, streak bonuses, and variable rewards. Allow me to break this down into each of its components:

If you look at the first post-it note in the image above (the one on the left), you’ll notice three milestones and one bonus on the bottom. Each milestone corresponds to how many hours I’ve dedicated towards interview practice. In parenthesis next to each milestone is the reward I unlock when I reach the milestone. As you can see, after one hour of practice, I earn two Rockstar energy drinks (energy drinks are one of my guilty pleasures). After five hours, I can buy a case of Sencha shots (strong green tea in a shot-sized can). After ten hours, I can treat myself to a trip to the mall to buy some new clothes. And the bonus, unlocked if I am able to make progress for 10 days in a row, allows me to buy one item on ThinkGeek, up to $100 in value.

Learnings: The key takeaway here is that pairing the the ability to quantify and measure your progress with periodic rewards earned along the way is a fantastic method for tackling larger projects and maintaining your momentum. However, something new that I learned during this experiment is something I like to call thereward feint.

A reward feint is a tactic in which you choose a reward that you’re able and willing to reward yourself with once you achieve your goal, but it loses it’s appeal upon completing your goal. For me, brand new devices (like the iPad Mini, new as of this writing) are fantastic reward feints. I may really want it initially, so I’ll set it as the ultimate reward for completing a big project. As I work every day, I’m driven forward by the thought of buying the iPad Mini, guilt-free. But by the time the project is completed, time has passed and I realize I no longer desire it as much as I thought I did (especially once the hype dies down). Plus, I usually feel so good about having completed this massive project, that I feel satisfied and content without needing to cash in on the reward I set. Isn’t it funny how our minds work? Ultimately, this tactic allows me to add compelling rewards to my goals without having to cash in on all of them, saving me money. And who doesn’t like to save money?

The two tracking elements in play here are time tracking and streak tracking. Every time I’d start practicing for the interview, I’d turn on a stopwatch in my browser (as shown below). 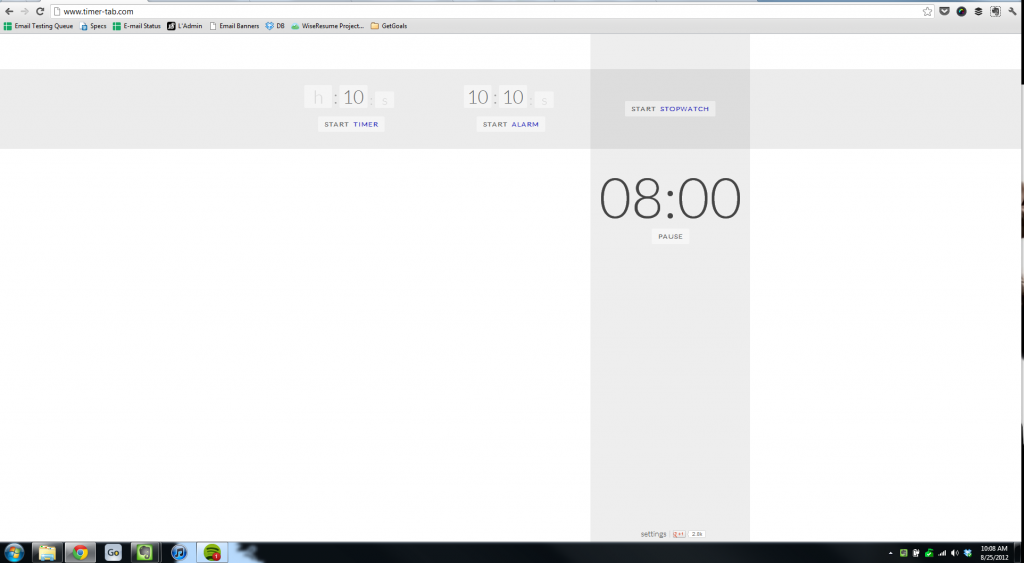 At the end of each practice session, I’d record my time on the second post it note from the left (again, referencing that first image of the post-it notes on my desk). The number in parenthesis on that post-it note indicates my streak (how many days in a row I’ve practiced for the interview). If that number reached 10 at any point, I’d unlock the bonus reward on the first post-it note.

Based on the writings of Nir Eyal, I’ve become very fond of variable rewards for influencing my own behavior. This was my first time experimenting with variable rewards for my personal goals, and I loved it. You can see the variable reward structure I used on the third post-it note above. Here’s the breakdown: whenever I would log an additional hour of interview preparation, I would be allowed to flip two coins. If they both landed heads, I would earn the reward (in this case, those oh-so-caffeinated energy drinks I long for).

Learnings: I actually underestimated how effective this variable reward would be on my desire to log additional hours of interview preparation. Similar to someone playing the slot machines, I enjoyed the brief thrill of playing the odds to win something. Especially after four hours of intense practice, having four coin flips was something I looked forward to at the end of the work session. Based on the success of this addition, I plan on adding variable rewards to all projects I work on that I feel warrant gamification.

Upon reaching the 16-hour mark of interview prep in under a week, I was feeling weary. I needed to throw all of my heavy artillery into the mix to keep me motivated. So I decided to add one more game mechanic into the mix to give me further incentive to keep working: the progress bar, which is the left-most post-it note below.

I love progress bars with a fiery passion. So does LinkedIn – have you ever been bugged to death by the incomplete progress bar in your LinkedIn account? I’m incredibly susceptible to this, so I embrace visible progress bars in any goal that I can. When I felt my motivation levels dropping, I brought it out more prominently. In this case, I had a massive list of interview questions I needed to practice answering. I decided to tackle them in batches, and once I rehearsed them at least five times, I’d mark this as complete on the progress bar.

As I worked, it started to fill up.

And it continued to do so, until I reached 100%. (Notice how the milestones are being reached over time as well.) 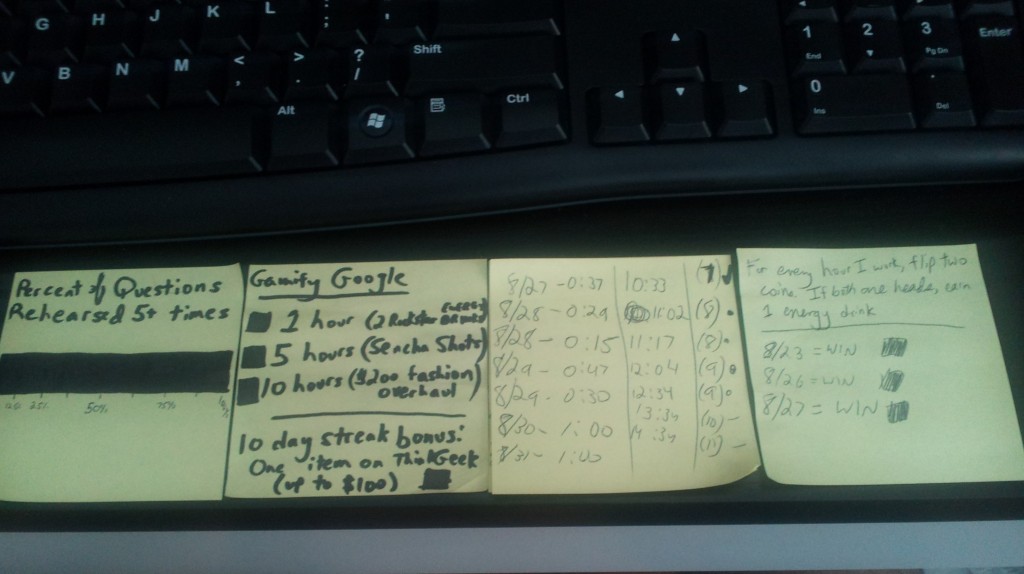 One other tactic I developed is something I like to call low energy progress enabling. In order to explain this unnecessarily-fancy-sounding technique, let me start by clarifying that interview prep is mentally taxing work. Rehearsing interview questions and answers out loud to yourself can get very tiring, as can reviewing large amounts of information related to your potential role, the company, your work experience, and everything in between. I had learned from past experience that when I’m feeling tired and low on energy, it’s very difficult to muster the strength to do a productive interview prep session. Surely, I thought, there must be a way to stay productive even when I’m feeling low on energy.

And then, it hit me. What if I recorded myself rehearsing the answers right off of the Q&A document I had created? That way, when I was feeling low on energy, I could listen to myself going through the interview process. Surely, listening to the Q&A and mentally following along would be more productive than sitting around debating whether or not I had the energy for yet another round of rehearsing out loud. Below you can see me on the J train, listening to myself rehearsing interview questions and answers. (Please ignore the caffeine-laden Sencha Shot also in my hand.) 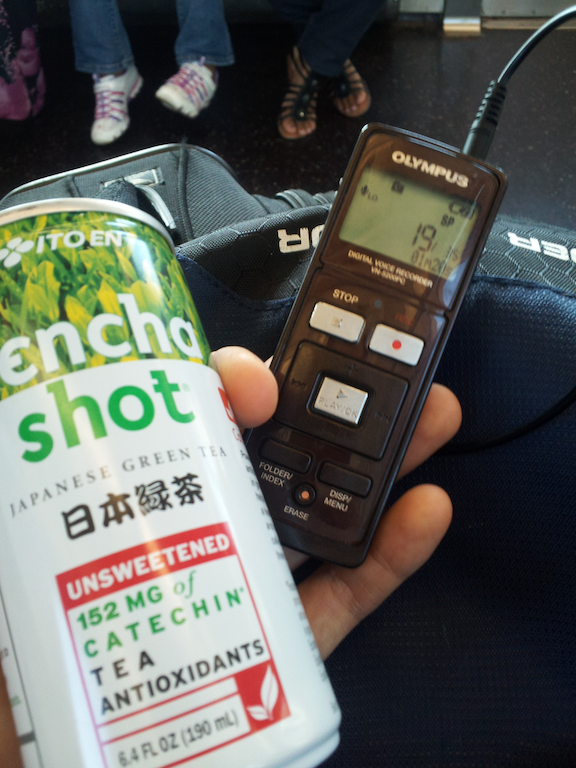 The results, you ask? To keep things short, I arrived at the interview nervous as hell, but I was incredibly well prepared. And I never would’ve been so thoroughly prepared without the system I’ve described above – every spare moment of my days leading up to the interview were filled with preparation and practice, which paid off in spades. Eight weeks later, I’m sitting in my San Francisco apartment, currently employed by my dream company. I’m so glad I was able to use gamification to help me capitalize on this once in a lifetime opportunity that presented itself to me.

Nobody likes to have to hustle at a frenzied pace at a moment’s notice, but there will always be times when it’s required to take advantage of opportunities. That’s where gamification really shines – it makes channeling every ounce of motivation you’ve got stored inside you much easier. And as I stated earlier, the main goal of this blog post is to inspire you to try a similar system to improve your work ethic and better capitalize on the opportunities that present themselves to you as you move through life. Any questions or feedback? Leave them in the comments below.