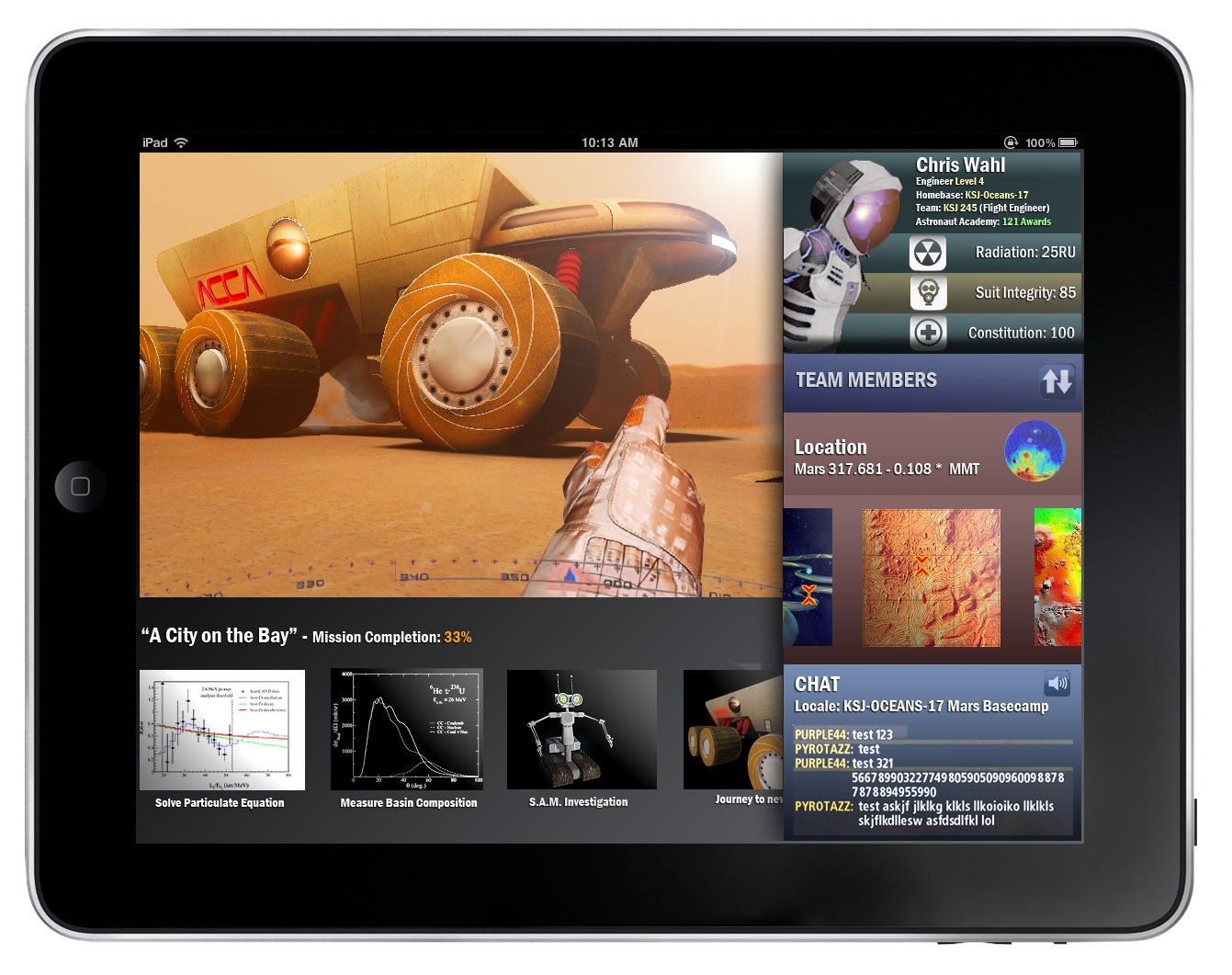 In the wee hours of Monday, August 6, 2012, science geeks from across the globe waited with bated breath while NASA’s immense, expensive, and undeniably awesome Mars Curiosity Rover walked the gauntlet known in space circles as “Seven Minutes of Terror.”  Engineers at Mission Control held their collective breath (along with Internet and television viewers around the world) waiting for that first sign of life from the most sophisticated piece of human technology ever to land on another planet.

When the signal came, letting the world know that Curiosity was a go, it was pandemonium at Mission Control.

The ultimate Epic Win for science.

Many of us who love games spent much of our childhood watching the skies, idolizing those astronauts and scientists who were able to break past the boundaries of gravity and inertia and jet out into the great unknown of space.  Some of us even harbored secret desires to become astronauts or scientists ourselves, daring to risk it all on the cutting edge of knowledge in order to reach the final frontier.

Of course, then we grew up and got real jobs, leaving our dreams of space in the basement with our Star Trek jammies and scale-model TIE fighters.

Fortunately, gamification can give us that dream again, in the form of Starlite, the new MMO currently being developed by the NASA Learning Technologies (LT) project.  After nearly doubling their Kickstarter fundraising goal in October, 2011, the developers set to work in creating this realistic, educational MMO scheduled for beta to start before the end of 2012.  According to the game’s FaceBook profile, users can

Play as an aspiring astronaut in Starlite, the official NASA MMO game. Set in the year 2035, you will embark on an adventure into space, Mars, the asteroid belt and the outer planets. You will uncover secrets about a threat to civilization as we know it and build you and your team a high-tech inventory of space gear including a home base, somewhere out there.

Starlite joins Moonbase Alpha as part of NASA’s realistic, immersive games which serve the dual purpose of educating users about real science and revving up the enthusiasm for space exploration that has been somewhat lagging over the past few years.

Moonbase Alpha has already had over 500,000 downloads, and interest in Starlite can’t be far behind.  With the Curiosity Rover and the possibility of commercial spaceflight dominating the airwaves, space is cool again.  The list of people who’ve already purchased tickets on the Virgin Galactic includes such celebrities as Brad Pitt and Angelina Jolie, Dr. Stephen Hawking, the United Kingdom’s Princess Beatrice, Cosmos Magazine co-founder Dr. Alan Finkel, and of course–Paris Hilton!  (Apparently, William Shatner passed on an invitation from Virgin’s owner Sir Richard Branson to be among the guest list.)

Still, for most of us, actually getting out into space is a dream we’ll have to save for our next incarnation.  Face it, unless you’re setting the curve at MIT or have a spare $200K for a ticket on Branson’s Galactic, space is an unattainable dream for most of us.  Perhaps someday taking a flight to the moon will be as common as a non-stop to Phoenix.

Starlite’s main page and Twitter have not been updated for about two months now so it may be unlikely that we will get to see the projected beta to actually happen on-time but until then, there’s always Moonbase Alpha…