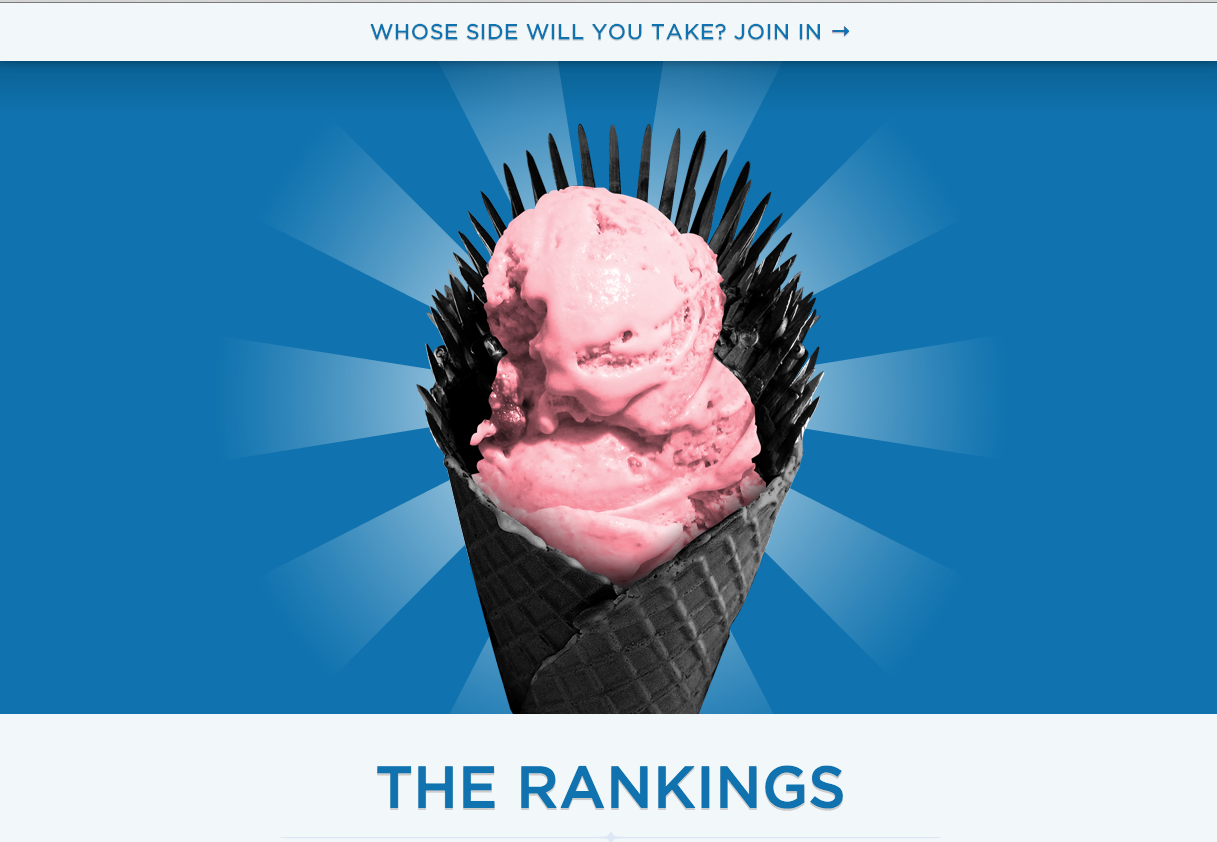 Foursquare’s Game of Cones is Lacking

I’m a recent convert to HBO’s hit series, Game of Thrones – and binge watching in catch-up mode is a favorite activity in my home on lazy Sundays. Inasmuch as I’m just getting to know the complex, fantastic miniseries, I’m no ice cream or gamification neophyte. So it was with some excitement that I followed Foursquare’s newest promotional tie-in, The Game of Cones.

Sponsored by HBO, the contests asks Foursquare users in SF and NYC to rank their favorite ice cream places by checking in on the mobile location-based app and using a hashtag. The top vote earner in each city will win an “Iron Cone” that is likely to be a virtual badge displayed on their business’ profile, along with a rumored physical trophy. As Foursquare has shifted toward becoming a business-review website that competes with Yelp, and HBO apparently has extra money to spend on a show that’s on summer hiatus, the program seems consistent with their objectives. However, something seems to be wrong – and the leaderboard gives us a quick clue:

The 2 week contest is more than half-finished, and in NYC only around 6000 check-ins have been recorded – San Francisco’s numbers are much much lower. How is it possible that America’s top mobile social network, its favorite dessert and one of the most watched shows in cable history can only get a few thousand check ins – let alone people – to participate?

Foursquare’s user engagement levels are low and not trending in a positive direction. Since the company all but abandoned updating the core gamification features of its service, user engagement hasn’t matched user acquisition growth. Put another way: existing users are apathetic about the service and it shows. I’ve long argued that Foursquare’s main value proposition was as a sophisticated real-time, geo-aware gamified experience that is valuable in and of itself. The company instead has tried its hand as a lightweight loyalty program, a utility, a marketing platform and a Yelp competitor. None of these attempts have yielded anything even close to the power of Foursquare as a gamification platform.

Although the company’s travails have been well documented, the abject failure of this campaign would not have been remotely noticeable if it wasn’t for one key game mechanic: the program’s leaderboard. This powerful tool for comparing performance and triggering tribalistic competition also discloses what people are doing, and if the results are dismal, everyone will know it. This kind of problem could have been solved by using an alternative scoring system instead of pure check-ins. For example, a composite score that combines check ins and other actions like velocity, comments, ratings, etc. in a single number, color or graphic.

But the company also made some core mechanical mistakes with the program that invariably undermined its potential. For example, one of the strengths of Foursquare’s system has always been that its focused on a user’s own experience, less so on the places they visit. This contest would have been much more interesting (and successful) if it had been about Foursquare users competing to eat the most ice cream, find unusual flavors, visit everywhere in a single day, etc. That is, playing for “Mayor of Ice Cream” would be much more interesting for the audience and then perhaps those Mayors could choose their favorite shop collectively.

Also missing is Foursquare’s trademark Surprise and Delight factor. The contest started by being restricted to the top 10 ice cream shops in each city as rated in the company’s fledgling reviews service. But this eliminates the opportunity for underdogs to compete (and possibly drive activity), it removes the option for something random and hilarious to happen, and basically ensures that the contest feels stale or boring…after all, it’s already the top ice cream shops in town. And what about the Foursquare user who loves to discover a new place, one who feels strongly about under appreciated spots (Hey, DQ has some great items!) and other issues of technology and progress (on a stick! yogurt! greek ice cream!)? None of these matter for the Game of Cones, and that’s a clue as to why the Game of Cones doesn’t matter to Foursquare users.

The missing element is passion and engagement. This program is nothing more than a dull Top Ten campaign without anything substantial to win, no real debate, no editorial insight and minimal value-add for anyone in the ecosystem. Heck, you don’t even need to try the ice cream to register your opinion – and that’s just a shame.

Also disappointing is how far from its roots Foursquare has gone. As a Yelp competitor or marketing platform the company is an also-ran. But its gamification expertise could have made this campaign an award-winner. It had all the possibility, but realized none of it. And unfortunately, with its anemic participation now public, it doesn’t reinforce Foursquare (or HBO’s) marketing chops.

But it is making me hungry. Off to Laboratorio Del Gelato I guess for my favorite cone in NYC. 🙂