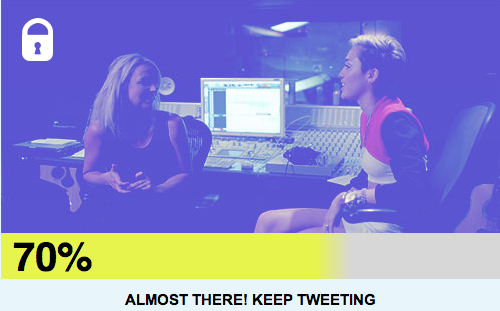 Can’t get enough of Miley Cyrus these days? Inspired by epic tongue actions? You can get even more Miley by watching her new documentary dubbed, Miley: The Movement, airing tonight on MTV at 9 PM ET. But for the true Miley fans out there, Mashable reports that you can also tweet #UnlockMiley to unlock two bonus scenes with one featuring Britney Spears.

This social media campaign has been running since last night at 10 PM and has produced an estimated 19,100 tweets since then, with ~11200 of those coming in within the first hour of the campaign. Tweeting doesn’t actually produce an immediate effect on the progress bar (above) and you’re being encouraged by a lackluster line that wants you to continue tweeting for no particular reason. As of the time of writing, the bar is at 70%, which would mean it would take ~27,000 tweets to unlock the first video.

As far as a “gamified design” goes, this is as shallow of an implementation as it gets but it doesn’t mean people aren’t paying attention and using it. A quick search into the #UnlockMiley hashtag shows that numerous people are tweeting and retweeting this hashtag multiple times, even if those particular tweets don’t contain anything more than the hashtag itself.

The #UnlockMiley campaign can be seen as shallow/lazy or genius/cheap depending on your perspective and lends some credence to the idea that not every gamification layer needs to be deep to produce some results. Granted, this shallow layer can succeed because it will only be run for a few days, as anything longer will surely see a major dropoff in engagement overtime.

Or it’s also possible it wouldn’t fail at all because Miley Cyrus, leading to a larger discussion on content vs depth of mechanics altogether.

As gamification designers, we do need to uphold our design principles and create high quality experiences to advance the industry but perhaps there are some “quick-fixes” out there.