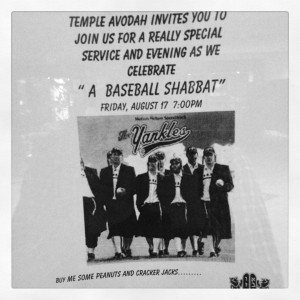 Just when you thought nothing was sacred in the field gamification- you find out you might be right!

Temple Avodah, a temple serving a suburban community of Reform Jews in Oceanside, NY gamified their Friday night services this past week by surrounding the traditional pillars of a kabballat shabbat service with “Jews in baseball”-themed trivia. For one evening every summer, Avodah’s Rabbi Uri Goren takes on the role of a sports broadcaster, their cantor opens the service by belting the national anthem, and the congregation elects two sets of teams amongst themselves to run 3 bases around the outdoor bima (or pulpit, if you prefer) set up in the building’s parking lot. It’s all part of an effort to improve attendance during a time of year in which it might be easier to get Jews across a parted Red Sea than it is to get them to come to temple on a Friday night.

Much like that Red Sea, the congregation was split right down the middle – Yankee fans were seated on the right side of the aisle,  Mets fans on the left. Each side elected two members to represent them during the game. The Mets draft pick consisted of the Temple’s president along with a father of two young boys. The Yankees selected two men, one of whom attended Dodgers games at Ebbets Field as a child. As with the real life MLB team, the Mets didn’t stand a chance. After each psalm set to baseball-themed music (L’Cha Dodi was set to “Take Me Out To The Ball Game”), a lay volunteer pitched a question to both teams. The first team to answer correctly was asked another 2 questions. If the team answered all 3 questions correctly, they advanced to the next base. Each team was able to get help from their side of the congregation, making this an engaging audience-participation game. The rabbi centered his drash (or sermon) around the idea that perhaps the seventh inning stretch which occurs during a baseball game was meant to reflect the idea of God resting on the seventh day. When the game ended, the entire congregation enjoyed a reception of peanuts, crackerjacks and kosher ice cream sandwiches wrapped in Good Humor-style packaging.

A service like this wouldn’t succeed in just any kind of congregation – Jewish or otherwise. To make Baseball Shabbat work, Temple Avodah had to be willing to emphasize the communal worship aspect of shabbat over the solemn introspection which accompanies it on a traditional Friday night. Cooperation must be emphasized over competition- congregants seemed more interested in learning baseball trivia than in beating the other side, which kept things from getting acrimonious. I learned a lot about Jews in baseball (unlike your standard baseball trivia which features RBI stats, there were as many questions about owners and managers of baseball teams as there were about players), and I also witnessed Jewish values at work in this game. The advantage clearly went to players who were older and wiser, and the congregation celebrated their lifetime accumulation of this knowledge.

A game like this is great for organizations interested in education and team-building. The essential component that made it a fun, effective educational tool was the physicality of the game: players had to physically move around the space, and the audience was seated immersed inside the game. The essential component that made it a fun, effective engagement tool was the rule that players could solicit help from the audience. Whether this type of game can increase the size of an audience remains to be seen, but it definitely engages those who show up. It might be time for your organization to say: Play Ball!