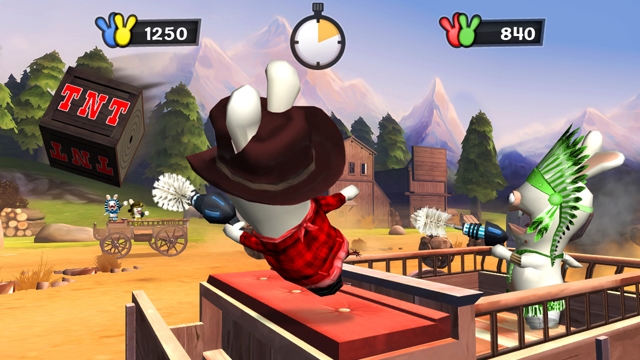 Most of the news surrounding gamification for health tends to deal with weight-loss and fighting childhood obesity but what about some of the positive effects? We’ve seen one study that shows videogames can offer “simulation-therapy” in improving vision. According to the HuffingtonPost, a new study has emerged that claims playing fast-paced games could even have cognitive benefits of improving the reading skills of dyslexic children.

A new study from the University of Padua in Italy has shown that dyslexic children playing 12 hours of video games without any direct training on how to do so achieved significant increases in reading abilities. The study divided children aged 7 – 13 into two groups, and had them play nine 80-minute sessions of games. Group A played Rayman Raving Rabbids, a fast-paced minigame collection and Group B played a much slower and relaxed game. Each group’s reading skills were tested after all the gameplay sessions were over.

The children in Group A who played the fast-paced oriented game demonstrated increases in reading speed, without decreases in accuracy, that would be equivalent to gains from one year of spontaneous reading development and even to that of highly demanding traditional reading treatments. Group A also displayed improvements in attention skills from the sessions, which can also have a direct effect on improving reading abilities.

The authors of study hypothesized that the children’s attention spans improved by having to adapt to the rapid actions occurring on screen from playing the fast-paced game. And while they are optimistic that video games can offer a new and more fun treatment for dyslexic children, the lead author states: “These results are very important in order to understand the brain mechanisms underlying dyslexia, but they don’t put us in a position to recommend playing video games without any control or supervision.”

It’s apparent that video games have an adaptive effect on eyes that improves ocular function but until these findings are fully conclusive, videogames can’t quite be that tool we all hope for just yet. The study’s summary also unfortunately leaves out details of what the second game actually was and who funded the study, considering the very prominent use of Rayman Raving Rabbids as the “beneficial game”.

Nonetheless, the silly game with screaming cartoon rabbits is likely a much more engaging proposition for dyslexic children than say, Hooked on Phonics.