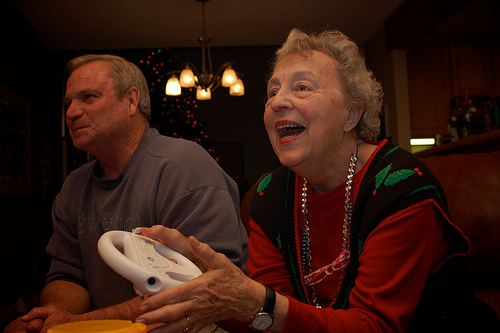 A research team from North Carolina State University recently submitted a study for publication in Computers in Human Behavior stating older adults that played video games showed an improvement in health versus non-gamers.

In this study, 140 people older than 63 and above, with an average age of 77, were asked about the frequency of their game playing and then interviewed about how they felt physically and emotionally. Sixty percent of the group said they picked up a controller at least here and there, while 35 percent enjoyed some gaming multiple times during the course of the week, which qualified them as regular players.

The results revealed regular or occasional players did indeed have a higher level of well being, were less likely to suffer from depression and felt better physically as well as mentally, than the older adults who did not indulge.

“The research published here suggests that there a link between gaming and better well-being and emotional functioning,” Dr. Jason Allaire, lead author of a paper describing the study and an associate professor of psychology at NC State, said in a press release. “We are currently planning studies to determine whether playing digital games actually improves mental health in older adults.”

A 2010 study in the American Journal of Geriatric Pyschology, buttresses NC State’s work, as this research group discovered seniors that regularly use entertaining video games which combine game play and exercise were much less likely to exhibit symptoms of subsyndromal depression. This type of depression is considered to be not quite severe enough to be classified as a major depressive disorder.

Another study published last August in PLOS One concluded that “older men who use computers have lower risk of receiving a diagnosis of dementia up to 8.5 years later. Randomised trials are required to determine if the observed associations are causal.”

As the size of the study group was not very large, Elizabeth Armstrong Moore of CNET pointed out their results were not wholly conclusive.

“The study is small and the results only demonstrate correlation; it could be that those who elect to play video games are, for instance, healthier and more social to begin with than their non-playing counterparts. Also, it could be their interaction with friends or family members as they play video games, not the gaming itself, that boosts their overall mood.”

Even if the study isn’t conclusive, playing videogames with your grandparents is something they would enjoy as an act of family love — something I’m sure will keep them happy and healthier.

So dust off that Nintendo Wii and play some more bowling!