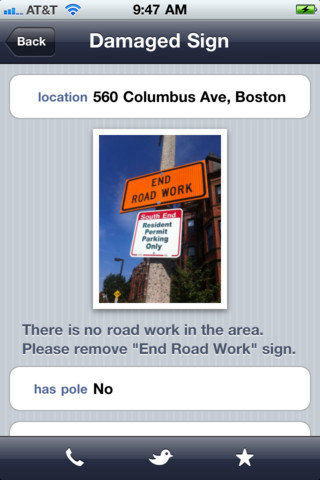 If the case for non-physical rewards (see SAPS) as a motivator still hasn’t convinced you of its effectiveness, you might want to look at Boston’s government mobile app that will allow Bostonians to improve city services.

Released in 2008, Citizen’s Connect allows local citizens to report issues like broken signs and potholes to make sure they are fixed quickly. According to SearchCIO, this effort is in part of Boston CIO, Bill Oates’ desire to create an active communication loop between citizen and workers to ensure city problems are solved.

The application will allow citizens to supply a work request, where a city worker can then address those updates, solve the problem, and even supply a picture of the finished job. Oates thinks this communication loop could be even stronger to take engagement further and make connections between citizens and workers more meaningful.

In Citizens Connect 4.0, slated to be released later this year, citizens will now be able to thank workers for a job well done in a system similar to Facebook’s “like” mechanic. Note that there are no points and badges present here; Citizens Connect 4.0 will be engaging the workers of Boston with a valuable reputation system that directly corresponds to the well-being of Boston and its inhabitants.

Regarding the new feature, Oates stated “For our workers, it gives them a chance to really want to do a good job and be recognized”. If the success of Work.com (Formerly known as Rypple) is any indication of the value of immediate feedback for engaging workers, then this new mechanic is sure to be a really great addition to Citizens Connect.

Bill Oates believes that gamification and the consumerization of IT will be revolutionizing how businesses will be motivating their workers and Citizens Connect 4.0 is one small step towards the future of engagement.

“Technology providers are beginning to integrate game mechanics within their solutions, so gamification is coming to the enterprise whether CIOs are on board or not,” says Oates.

Oates’ new gamification implementation in Citizens Connect 4.0 is a great example of how an effective and smart addition of gamification can motivate people without using extrinsic rewards.

Citizens Connect 4.0 will be out later in 2013 and is available for iOS and Android.