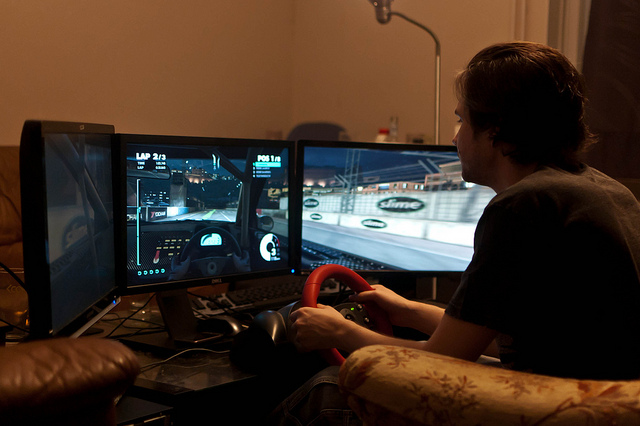 For people who still watch regular broadcast television, it has become very common to actually watch TV while simultaneously using your laptop, phone, or tablet. Savvy networks like USA/NBC have picked up on this and created gamified mobile companion applications to engage with users as they both watch TV and browse on the net. There are compelling case-studies that outline the efficacy of this concept, coined the second screen, but I have not really seen any other kinds of engagement tactics for viewers. However, I found inspiration for new possible ways from the gamer community, and more specifically, the Dota 2 community.

Dota 2 is classified as a MOBA game (multiplayer online battle arena) and is a competitor to the most popular game in the world, League of Legends (LoL). And just in case you didn’t know, here’s a quick update on the state of gaming: World of Warcraft (WoW) and MMORPGS are not the most popular games in the world as they once were in the early 2000’s; MOBA games rule the gaming world right now.

The company behind Dota 2, Valve, is no slouch when it comes to innovation and the Interactive Compendium they’ve created to support their international Dota 2 championship tournament has a number of interesting ideas that broadcast media can really take advantage of.

The Interactive Compendium  is a virtual book that will allow spectators and fans to bet on who will win each round of the tournament, keep a record of their success, and even allow them to vote on an all-star game featuring their favorite players. Each one of these virtual primers will cost $9.99 and $2.50 of each purchase is put towards the prize-pot. What is interesting about the compendium is that it isn’t required to view the tournament in any way. Valve incentivizes these purchases by putting Kickstarter-esque stretch goals that reward buyers for purchasing compendiums.

As of today, the Dota 2 tournament currently features $2.1 million in prizes and has already reached 3/7 stretch goals that have unlocked an XP boost for all buyers, more stages of evolution for their pet (more on this later), and a custom skin for their HUD. If enough players buy compendiums and the prize pot reaches their $3.2 million goal, then players will also unlock special limited edition items, decide who gets to play in the all-star game, and actually choose the next character who Valve releases for the game.

Valve wants Dota 2 viewers to use this compendium to enrich their tournament spectating experience and rewards their purchases by allowing them to influence the actual state of the game and tournament. These concepts may not seem new but Valve’s approach makes them significantly better.

Second screen experiences for TV shows have asked viewers to vote on certain outcomes in the plot of shows and commercials but they’re really only choosing between a number of pre-determined outcomes; compendium owners will be able to vote on a hero that will completely affect how the game will be played from that point on. The All-Star game will also be significantly more meaningful to the viewers because they force higher quality votes for participating players. In American sports, All-star game players are determined by popular votes through public polls but the Dota 2 tournament qualifies all the voters as a result of the cost of the compendium. Voters need to be invested enough into the game to have put $10 in for a vote and this limits any random person with an opinion from affecting/trolling the vote outcomes. In short, Valve is allowing viewers to feed the tournament with their support in exchange for a richer experience that has real impact on the future of the game.

As mentioned earlier, one of the prizes for reaching the stretch goals of the grand prize was more evolutionary stages for the virtual pet that comes with the compendium. What the virtual pet does in the context of the game isn’t that important but what is important to note is that the pet actually grows and evolves in relation to how much you watch games in the tournament.

This video shows how the pet changes from a four-legged creature into a flying creature and there will be many more aesthetic features and stages that comes along with more viewership. The changes are aesthetic and do not impact the game but they exist as a status symbol. While this feature isn’t very engaging by itself, making it a supplementary gift to viewers during big events allows them to have a token and “proof” that there there. The level of evolution in the virtual pet shows exactly how much they participated and offers varying degrees in the quality of the “status trophy” they earned.

Conceptually, the pet is similar to a unique achievement one might receive for checking-in to singular events but the pet differs in that it’s used in the game’s mechanics and can be actively seen by players who use them. The compendium also aims to exist as a virtual book that is a recorded anecdotal account of that players experience throughout the tournament. Traditional broadcast media should aim to provide a passively generated history/representation of their user habits to further offer viewers greater ownership and relationship with their viewing.

3) Chatting Live without Hashtags is Superior

Part of the huge growth of MOBA games and their popularity can be attributed to the explosion of popularity in the streaming community. Supported by services like Twitch, it has been discovered within the past 4 years that gamers actually really love watching people play games.

Twitch is arguably the top streaming platform for people to stream all their gameplay and it contains it with a handy chatroom. I would contend that without any sort of chat integrated into Twitch, it would still be hanging on to the coat-tails of Justin.tv as an unknown service.

Second screen experiences (and quite frankly too many social media campaigns in general) ask people to join the conversation through a hashtag. Observing a column as it refreshes for specific hashtags and tweets is a decent way to “join a conversation” but it is nowhere comparable to the immediate feedback and energy you get when people react the same way as you do on a stream. This video of a streamer is a perfect example of what I mean: check out the explosion of chat laughter that happens around 0:19.

Twitter can’t ever replicate this kind of interaction because it isn’t made for this type “short-form commentary” that is really only natural to speech. I’d argue that Tweets are often constructed with viewership and sharability in mind but chatroom activity is pure and unfiltered social commentary at its finest. You can’t find this experience anywhere else and dare I say it, it’s almost like I’m actually watching the video with these people. 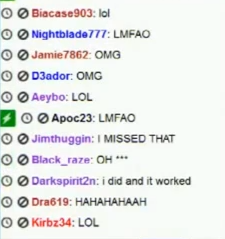 I think the implications for having a chat window next to a video playing dramatically changes how that media is perceived and could lend itself immensely to real sports as it has for “eSports“. Chatrooms offer this immensely satisfying and immediate stream of information that can be maintained in a semi-controlled environment. Traditional broadcast media should start to offer an alternate/optional viewing method that allows viewers to chat instantly about what’s being played. As more and more people begin to cancel their cable TV subscription entirely, I suspect this will become more common with streaming services and online events.

Second screen is inherently an odd concept, especially when it comes to engagement, because viewers are dividing their attention between two devices that are in two different locations. Truly engaging viewing experiences should simply be contained in one location and in one screen so that viewer’s full attention can be focused. Second screen tactics seems to only cater to a technologically savvy and younger crowd.

While Gen-Y is becoming increasingly distracted in a state of constant multi-tasking, I’m not convinced they’re performing any of their daily multi-taking effectively. By thinking about gamifying the TV experience in ways that go beyond adding an additional screen, we can focus on making the original viewing experience even more engaging and accessible by taking a few cues from the gamer community.