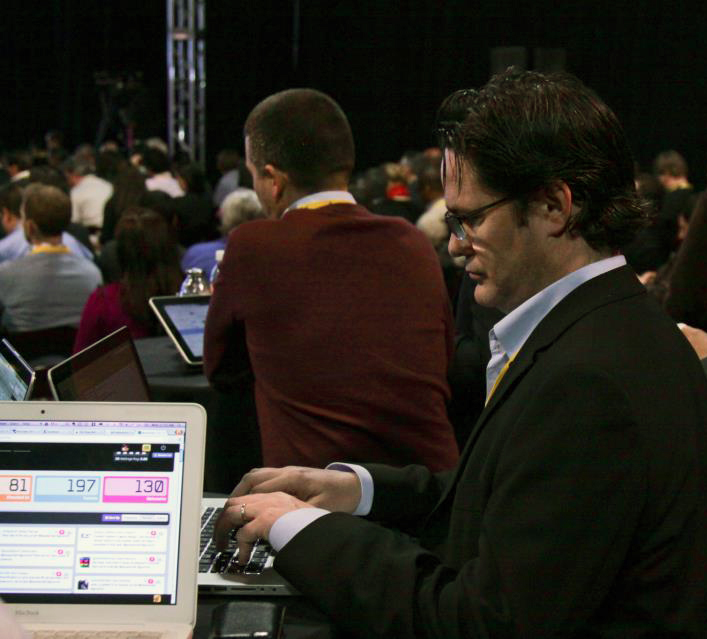 The Following is a Guest Post from Justin Stein, Assistant Account Manager at ROI.works Search Marketing, Inc. and GSummit Alumnus

Memecube can drive some interesting behavior

Maybe you noticed my Twitter feed blowing up over 2 days in the middle of April. I didn’t count but I’m told there were well over 100 tweets in that brief period of time. While my followers should be used to booms when I hit a conference, this was definitely another level.

The reason for my tweet-binge was Memecube. Memecube is an interesting twist on the usual session hashtags; a conference exclusive Twitter tool. Only attendees were told the URL needed to access the system; in it was the conference schedule. After checking in to a session, you only see tweets from others who are also using Memecube and have checked in and new tweets auto-populated with the speakers’ Twitter handle & the GSummit hashtag. This meant, despite GSummit becoming the #1 trending hashtag on twitter during the conference, we did not see the usual assault of the bimbots. Additionally we didn’t have to try to separate our session from all the others to tweet or retweet something relevant, and the overall system was just easier to use. I cannot think of something the DreamForce Conference needed more.

Getting to the point, the reason it caused me to tweet so much, is that they gamified it, as is appropriate for a gamification conference. There were points and a leaderboard and I discovered rather quickly that I was in the top 15, and only a dozen points from top 10; need I explain how this cycle continued?

Memecube is a new system produced by Dopamine and built on BadgeVille’s Gamification Platform. Memecube was designed specifically for the Gamification Summit, but I won’t be surprised to see it launched as its own product shortly. As with any new product, Memecube has its  bugs and room to grow but I’m sure Memecube will get those fixed for next time.

Why You Opened This Link

So, what happens when you create a contest at a conference about Gamification and turn us loose on a brand new system?  I tried everything to game the system and here is what worked and what didn’t:

My first instinct was to retweet everything anybody posted, because the first few retweets gave you points. I didn’t at first for fear of destroying my already average twitter account, when I realized things weren’t actually retweeting (on day 2) I started retweeting everyone that I wasn’t actively competing with. Shortly thereafter, I realized that after you got the badge for retweeting 25 times there were no more points to be had from that route. Nevertheless, I continued anyway in the hope that people would see me retweeting them and reply in kind. I think I got a few follows from that practice.

Normally at a conference I try to engage other tweeters by asking questions, making snarky comments that get replies, and replying to other tweeters when I can think of something. However, when I realized that favorites and replies counted for nothing within the system, I decided to switch tactics. My usual tactics doesn’t get many retweet and that’s where all the points were coming from.

Check-ins: Memecube grants 3 pts for each check in, so when the conference split from 1 room to 3, guess which room I was in? That’s right, all of them. On day 2 I found out that there was a cap on session check in points and you reached it at “full attendance” of 40 check ins. So that one didn’t actually work, it just skewed my day 1 points. However, I did make sure to check into every food truck and get a nice chunk of points from those. You could only check in to each once so limited but done.

I was retweeting sessions I wasn’t attending and live tweeting the ones I was, hoping for miscellaneous badges or just recognition that would grant me future retweets. This proved ineffective and distracting to the point where I am slightly embarrassed to say that I cannot currently recognize most of the speakers from the sessions I attend, so hyperactive was I engaged in this Memecube competition.

In a moment of desperation on Day 2, I changed my profile picture to one of a cute little cat on the edge of a chair, not even my cat, just a random one I found online, because according to a friend, “those cats aren’t cool enough.” This seemed to have minimal effect and may have hurt more than helped as I probably had a little recognition built up from my day 1 activities. Although I also considered stealing Gabe’s pic or one of the other leaders, I decided against it. The Cat + Internet should have been enough. Maybe I’ll do Mario Brothers next time =P.

I later discovered that the first two tweets in any sessions would give you 2 pts each, even if the session had passed… I had to think of a way to take advantage of this without alerting my competition, I needed some reason I would actually be tweeting to those missed sessions, I came up with this: 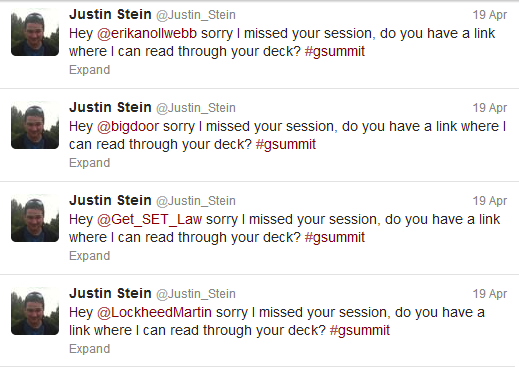 There is a little shame here, but I genuinely want to read the decks and if I got access to a good number of them I could put a post together linking to them all, however Gamification.Co beat me to it.

Ultimately the majority of your points were designed to come from others retweeting you, say the best thing, get the most retweets and you’d get more than a happy helping of points. I never figured out the exact points scale, but there were definite bonuses for large numbers of retweets. Theoretically, this should have promoted quality but I found myself going for quantity, as the most retweeted things are usually something a speaker said I had to be tweeting everything as fast as possible hoping to strike gold, and I wasn’t by any means the only one.

This also turned out to be the best way to game the system and the one I didn’t do, if you partner with somebody and agree to retweet everything each other posted. Get a couple people on board and you’re almost guaranteed to win.

A major problem with the Memecube competition was while the conference was 2 days, there was a workshop day prior to the conference that was included in the total scores, so while I got 4th place the 1st day and top 5 on the 2nd day, my overall endgame placement was 6th.

So here it is, the top 10 scores, the top 8 tweets and my stats page & many badges. Yes, two of the top tweets are about the chairs.

There is an argument to be made that despite all my “gaming” of the system, it was truly I who was gamed. I went out of my way to become a popular tweeter and tweeted more than I would have otherwise. Despite not getting into the top 3 which would have won 30 minutes with Gabe Zichermann, the conference founder, or a ticket to a future conference, I still got some value out of the experience. I won entrance to a secret session with Gabe and the other nine top tweeters where we all became BFF’s. As an unofficial beta tester and incessant feature suggester, I also got a chance to chat with the Dopamine team who created the Memecube system and I plan to continue to work with them on improving the overall system.

I didn’t game it Memecube for malicious purposes, nor am I sharing this so you can game it in the future. I’m not here to say “don’t hate the player; hate the game,” or to suggest that the competitive aspects of Memecube motivated me into trying to game the system and therefore I am not to blame.

To the contrary, I put this together to remind people that you want to ensure your system is designed to reward the user behaviors you want. Because Memecube in its current state gave most of its points based on other’s retweeting, the competition became a cross between a shouting match and a popularity content. My point is, Twitter at a conference should be about having a conversion around the topics being discussed, and not about who can repeat what the speaker said the fastest. Mostly, I wanted to remind you what will happen if you don’t design your system (gamification or otherwise) to prevent people from ‘cheating’.

So guys, what systems have you gamed?