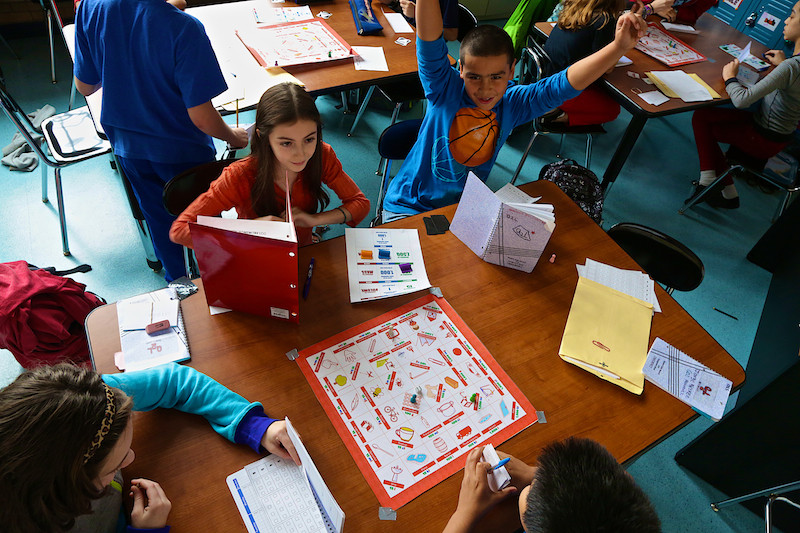 School is a game. As oversimplified as that may seem, a closer look at the mechanics of both reveal some striking similarities:

So why doesn’t entering a classroom feel as exciting as logging on to World of Warcraft?

Besides the obvious differences, when someone plays any game they’re doing just that. Playing. We forget the most essential part of doing anything is interacting. Games always grant us this ability. School rarely does. But one school in particular is blurring the line between games and education.

Quest to Learn is a public Middle and High school based in New York City where students interact with in-class topics by playing and creating games. The school implements the fundamentals of gamification in the way it educates, and describes itself as “a school that uses the underlying design principles of games to create highly immersive, game-like learning experiences.”

Within the school itself is the design and innovation studio Mission Lab, a branch of the Institute of Play. Mission Lab comprises of both game and curriculum designers. Together with the teachers of Q2L they form a three person curriculum team tasked with creating game-like curriculum and other learning materials for each classroom.

Brendon Trombley, a Game Designer at Mission Lab and one part of the curriculum triad, described the games and curriculum building process as such: “Each of us have very specific skills and considerations: The teacher knows the standards and the kids, the curriculum designer knows the vision of the school, and the game designer knows game mechanics and ways to engage users. We always start with standards and develop from there, looking for fun ways to engage the kids on those standards.”

Quest to Learn as a school earned an A rating from the NYC Department of Education in Student Performance, which measures student results on the 2012 state tests in English and Math and in the past year the school’s percentile ranking increased by 15 points.

When asked how any teacher might incorporate this style of learning into their own classroom, Trombley said, “the easiest application of games is as a “practice” space on content they’re already familiar with. They don’t even have to be digital or video games. Jeopardy is a game-like system that many teachers use to review content, and there are plenty of others. Simple solutions like these will give a teacher a feel of how games look in the classroom without too much time lost.”

Mission Lab is currently working on ways to share its work with other educators. The studio is in the process of creating “Design Packs”, printable guides for game-like learning and systems thinking. Trombley also added that this Fall, Mission Lab along with the Institute of Play will be publishing test-runs of their classroom games and will soon be available to pick up or download.

It seems odd that the majority of students today do most of their exploring and collaborating within games and not school. Sir Ken Robinson, a leading education advisor, describes the issue saying “[children are] told there is one answer, it’s at the back, and don’t look. And don’t copy because that’s cheating…outside school that’s called collaboration”. Games aren’t the end all solution to this problem, but if school is game we need to do a better job of playing it.