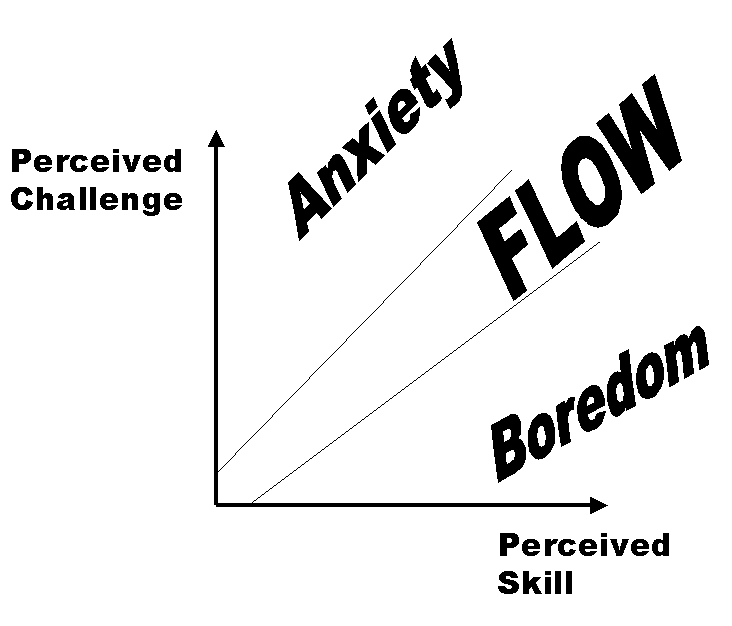 “Gold medals aren’t really made of gold. They’re made of sweat, determination, and a hard-to-find alloy called guts.” – Dan Gable

I have noticed that the terms “flow” and “deliberate practice” are being used interchangeably in the gamification community. This leads to misinterpretations that I feel should be addressed.

The term “flow” is one of the theories on what makes games fun. It was originally proposed by Mihaly Csikszentmihalyi, and in the nutshell statess that there is a sweet spot between a player’s level of skill and the challenge of play. If the challenge of a game keeps up with the skills of the player,  the player enters a state of flow and has fun. So – not too hard, but not too easy.

The term “deliberate practice” was postulated by Anders Ericsson. I will not go too much into the science of it (here is a quick reference if you are interested), but the basics are as follows: you break down a complex activity (like playing a basketball game) into small activities (like drilling the ball) and repeat this one activity again and again with the sole intention of improving. This is pushing yourself beyond flow to your very limit, with the intention to have that pressure change you and improve your performance. It’s not pleasurable. After 10,000 hours of deliberate practice you’ll have a world-class performer, or so the theory goes. 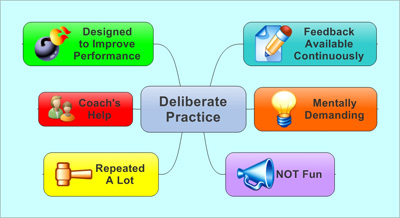 As you see, flow and deliberate practice are not the same concepts. The claim that Americans have tremendous latent abilities because they have spent over 10,000 hours in a state of flow playing video games is an overstatement. There are some tremendous opportunities for learning in the digital age (here is one of my favorite books on the topic), but we must not succumb to delusions. There ARE video games that motivate players to perform some kinds of deliberate practice, but semantics is important, and we need to begin separating different types of games.

“What is happiness? The feeling that power is increasing, that resistance has been overcome” – Friedrich Nietzsche

You must understand that there are two basic types of games:

We cannot create artificial power-ups in the real world, so we are, for the most part, stuck in training for skill-based games. This means you cannot recreate the long-term pleasures of a time-based video game in the real world, and trying to do so in a gamification design is chasing a chimera. If the laws in virtual games and real world games are different, why not begin to focus on what drives engagement in real world skill-based games? What makes athletes endure the pain and boredom of deliberate practice for the reward of winning in competitive events? It is often less prosaic than finding geniuses to staff a company, and many people can be trained to achieve excellence. What is required in many (but not all) cases is not trying to produce engagement by imitating the pleasures from a video game, but by producing the willingness to endure pain to improve the necessary skills.

Let’s also not forget that deliberate practice is a process developed in skill-based games. Should this process not have a place in the gamification revolution? I, for one, would like to see an introduction of sports psychology into the community.

“It is clear that skilled individuals can sometimes experience highly enjoyable states (“flow’” as described by Mihaly Csikszentmihalyi, 1990) during their performance. These states are, however, incompatible with deliberate practice, in which individuals engage in a (typically planned) training activity aimed at reaching a level just beyond the currently attainable level of performance by engaging in full concentration, analysis after feedback, and repetitions with refinement.”  – Anders Ericsson