The human body’s immune system works as a complex network whose different parts coordinate to fight off a wide range of threatening pathogens. But educators run into challenges bringing textbook teaching about the immune system to life. Ink and paper just don’t do justice to explain the complexity and the interactivity of the immune system at work.

Scientists have teamed up with game developers and engineers to develop a new game that shows – and teaches – how the immune system works. ImmuneQuest, the latest example of games in education, was developed with financial support from the National Science Foundation. 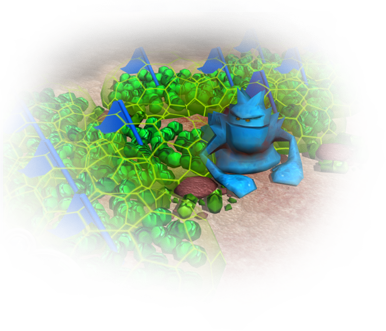 Students playing ImmuneQuest experience the interconnectivity of the body’s immune system by taking on the roles of the different parts of the immune system, fighting off invading microbes and viruses. The idea is for students to learn by doing. Students control immune characters, each expressing its own immunological actions. Players start with macrophages – the immune system’s first responders that are the first to encounter microbes in the body’s tissue. If these first responders are overrun, the body sends reinforcements in the form of neutrophils. Every time a player unlocks more immune system upgrades in the game, the player gets new immune cells to help overcome invading microbial threats.

Players might get caught up in the action. But they’ll also get a healthy dose of science along the way. During the game, electron microscope images appear that visually depict how the immune system response actually happens in the body. ImmuneQuest divides the immune system into five major parts, each part taking a player across three interactive levels. Three additional, and optional, bonus levels that offer students additional lessons. The progress a player makes in the game is meant to represent the progress the immune system makes in fighting off infection.

Developers are still working on additional levels, which will focus on the immune system’s defenses against viruses. By the end, developers say that players should have mastered knowledge of how all eight immune components work together to defend the body.

ImmuneQuest is available, free to download, for both Windows and Macintosh computers. While the game was made to be fun and instructive, developers also hope it sparks some career goals. ImmuneQuest’s developers say the game is geared particularly to college students, who could be encouraged by the game to pursue careers in health and medicine.