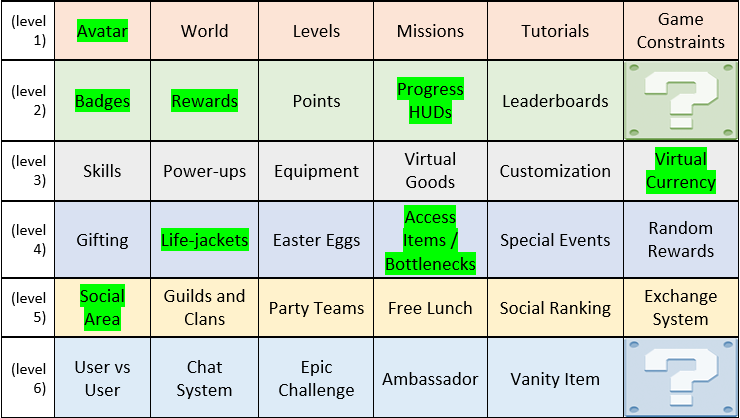 Although I haven’t been particularly interested in getting my Duo a fancy robe or other sort of outfit, users that get a kick from customizing their avatar probably do so. Let’s take a peek behind this door and imagine for a second the opportunities by further developing user avatars’ customizing options. I wonder if the app creators have considered the business deals that could potentially come together on this end.

Getting your Duo some clothing is one way for users to spend their lingots, which are Duolingo’s virtual currency and come to users in the shape of rewards. These are both very popular game elements, and so is the life-jacket that takes shape of the Streak Freeze. Users can activate this fail-safe feature during a prolonged day streak for the price of 10 lingots, but it is only used if they miss a day. This game element comes handy when users most need it, such in the case of having a 100-day streak vs a 5-day streak when you unexpectedly miss one day. Certainly, this feature is more valuable in the first scenario. Keeping up with a day streak may result exhausting especially the longer they get, which makes the Streak Freeze feature a clever means of compensation, designing for a balanced demand of user activity and keeping the Flow going. 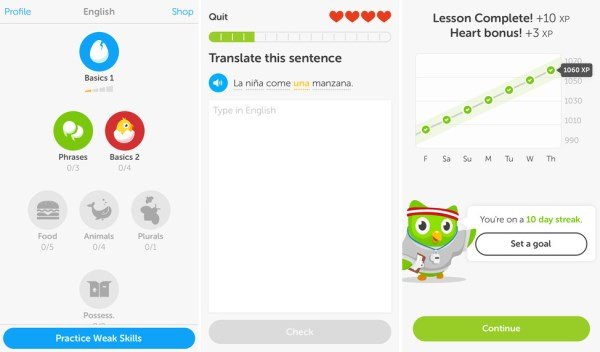 When users earn them during lessons or by keeping up with a 7-day Double or Nothing streak, lingots are interpreted as a tangible, expected, task-completion contingent reward with a fixed schedule, as it is only obtained once a set of actions is completed. It stimulates the intrinsic motivator related to personal achievement, and the extrinsic motivator related to getting Stuff in the shape of lingots. The Double or Nothing feature also brings in a gambling feeling adding some spice to the mix, since users will lose the 5-lingot bet if they don’t make the 7-day streak using the app. But it doesn’t stop there! The set of actions required to obtain this reward involves a level of commitment from users, when as soon as they hit the goal it feels rewarding itself.

Collecting lingots triggers a powerful dynamic related to the intrinsic motivator of Saving. Being able to collect and save lingots as users learn during lessons and complete levels, enables the mechanic through which the Streak Freeze feature becomes very useful if they aim at a hot day streak. The Double or Nothing feature also plays a strong role in this scenario, as an additional way to keep obtaining lingots and consequently keep using the Streak Freeze feature. Heck! I found myself engaged in this mechanic quite a few times during my memorable day streak. And to be honest, at first it felt like cheating… I mean, isn’t it supposed to be a streak of days in a row? But then I realized even if you are able to skip one day here and there without resetting the day-count, the accomplishment of being so consistent despite the missed days is certainly something to look forward to! After all, for 10 lingots a piece, how many days can your lingot bankroll take to keep joyriding the Streak Freeze feature? I also wondered if users would try to abuse it for the sole purpose of completing a Double or Nothing challenge. But sure enough, Duolingo’s creators must have considered this as well: Using 10 lingots per Streak Freeze for the end result of 5 lingots after a 7-day Double or Nothing streak is clearly not a profitable strategy. There will always be users that like to mess with the design and challenge themselves to find ways to possibly cheat the system; that is their core drive and quite typical when there is a virtual currency in place. User types in gamified environments opens up for an entire post thread of its own. We have barely talked about dynamics and game mechanics, which in my view are not to be misunderstood as game elements. Sure they all work together, but are not the same thing. 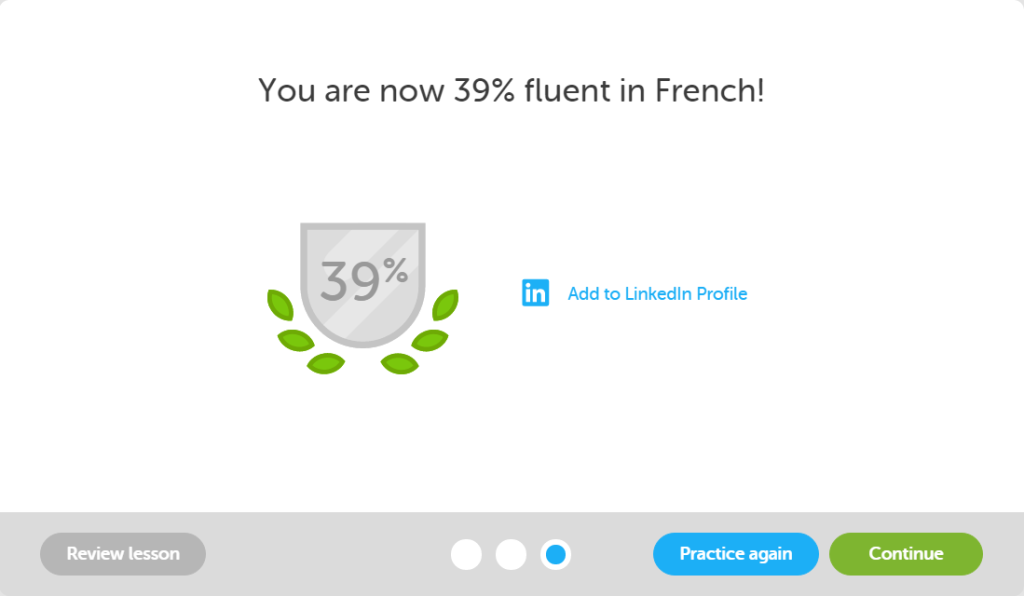 Being able to translate webpages from the language users are learning into English is another privilege that is unlocked as difficulty increases and when a certain level is reached, but it is ultimately Duolingo’s main objective. We approach perhaps what could be one of the main reasons behind the app’s success: The use of an access item / bottleneck element that deals with Status, interpreted as another intrinsic motivator presented by Dr. Reiss. This successful combination certainly reinforces the user experience and keeps them genuinely motivated. When users vote up or down and correct others’ translations they engage in the social area element, where user interaction is seen by working together, siding with each other’s opinion using skills acquired through using the app itself, and creating a strong sense of cooperation within the user community.  The type of message above is a clear example of progress HUDs (Heads-Up Displays) effectively informing users of their fluency percentage in a certain language. This feedback is crucial because seeing yourself making progress is intrinsically rewarding. This mechanic allows users to feel confident in their activity. Creating an experience for people to find that using the app is fun and making them want to come back is in a nutshell what gamification is about: Shifting people’s motivation from the “I have to” to a rather “I want to” mindset.

So far we have examined the following game elements used in Duolingo’s gamified design. We have evidence hinting the use of others, and there are also many others we haven’t even mentioned. Several game elements work even better when used together, as we can see between rewards and a virtual currency.

Which element could we say the Double or Nothing feature translates into?

Out of the relations seen between other game elements, which other combinations could Duolingo reinforce to engage users more effectively?