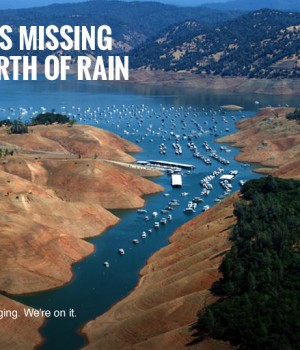 With much of the West Coast mired in a years-long drought, it’s hard to get away from the stream of messaging about water conservation. But much of that messaging doesn’t get through. Many people still use (and unfortunately waste) water in the same way that they did when water was abundant. A gamification startup called Oasys has a developed a device that aims to help homeowners understand just how much water they use.

The Oasys device is shaped like a small disc. The device is linked to a band on the house’s water pump that sends water consumption information to the disc wirelessly, explains GOOD magazine. Mounted on the wall, consumers can view the 3.5-inch display screen on the disc to see how much water they’re using. The disc glows different colors to indicate the type of information on display.

“Basically, it can alert you to times when conservation is important, periods of time over which your water usage is increasing or decreasing, and even alert you (via smartphone updates) when there appears to be a leak in one of your house’s pipes,” GOOD says.

Oasys’ developers understand that homeowners already have ready access to devices that save water, such as low-flow showerheads and faucets. But those devices don’t tell you how much or how little water you’ve used. The Oasys device is based on the idea that awareness of water consumption can be a motivating factor to be diligent about conservation. The company describes its device as a FitBit for the home. Just as the FitBit keeps users aware of the number of steps they take throughout the day so they can set targets and reach goals, Oasys keeps tabs on water usage so users can set water consumption targets and goals. Oasys was developed to help instill in people behavioral changes that lead to permanent water savings in the long run.

So how well will Oasys work? GOOD points out that while the device does a good job of making people aware of their water use, it lacks the tasks, puzzles, and progressive levels of complexity that are characteristic of traditional gamification apps. The Oasys opportunity, GOOD explains, might be in appealing to the mindset and demographic that FitBit did – those already motivated to measure and make changes in their behavior.

Oasys could go even further. GOOD points out that Oasys could provide incentives for users to invest in actual water-saving devices, which would boost the reward aspect. The device could also be part of information sharing that ups the gamification component by comparing a user’s data to the water consumption information of others – perhaps feeding the competitive nature that some people feel. Oasys won’t end the drought but the technology is showing promise of becoming a new tool to water conservation efforts.