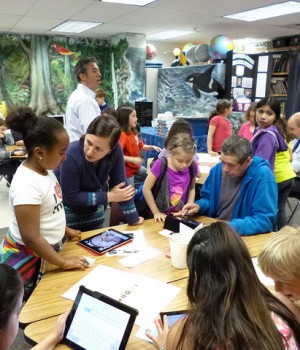 Gamification startups are a dime a dozen in Silicon Valley and the surrounding high tech area. Kidaptive, which makes an educational app aimed at preschoolers called Leo’s Pad stands out for two reasons. The founders of this startup located across from Stanford University have incredibly impressive backgrounds and the company raised 18.2 million dollars in seed funding which is unheard of for edtech.

The co-founders of Kidaptive are Dylan Arena Ph.D. and P.J. Gunsagar. Gunsagar is a graduate of Stanford Law School and the founder of Prana Studios which does animation and 3D effects for Pixar. Its credits include Disney’s movie Planes. Gunsager’s ties to Prana may account for the distintive animation seen in the Leo’s Pad “appisodes.”

Dr. Arena and the majority of the Kidaptive employees and advisory board members have doctoral degrees from Stanford in education and related fields. Arena in particular is a star of the academic world with a laundry list of advanced degrees, fellowships and even a stint as a United States Presidential Scholar for his work in assessments. His Ph.D. is in Learning Sciences and Technology Design which is perfect for someone whose title is Chief Learning Scientist. He is widely acknowledged as a leading authority in game based learning.

Leo’s Pad presently consists of 6 appisodes with plans to create a total of 25. The series stars a young Leonardo da Vinci. He is joined by junior versions of Galileo, Marie Curie and Confucius. Eventually a total of 8 figures representing all the arts and sciences will join Leo. They have been chosen with an eye towards covering all eras of history, having a balance of men and women and portraying a variety of ethnicities.

In addition to first rate animation, the app includes a comprehensive system which tracks user progress called the Parent’s Pad. The app teaches the usual numbers, colors and shapes but it also addresses social emotional skills like perseverance and delayed gratification. In all the app will cover 75 skills kids need to be kindergarten ready. The programming includes an adaptive algorithm which adjusts difficulty based on each user’s proficiency. Future plans call for the content to be part of a paid preschool enrichment program.