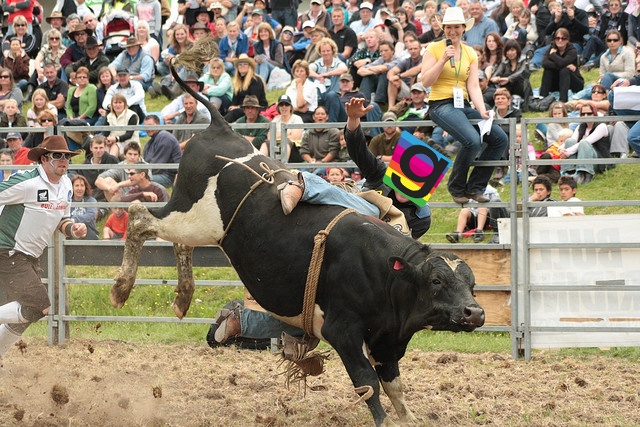 We here at Gamification Co have always maintained that earning “stuff” from a rewards program doesn’t amount to a hill o’ beans in this crazy world compared to earning status or special access, and this is even more true for a program for male prisoners who’ve been issued life and double-life sentences.

Let’s face it, there’s not alot of material prizes they can earn that’s going to alleviate the hardships of prison life, or rehabilitate them into becoming better men. Earning a brand new car can’t help when you’re not allowed to own it, or drive it around if you could.

That’s one reason why Burl Cain, warden of Louisiana State Penitentiary (aka “Angola”) used gamification to allow prisoners to level up to where they can compete for glory in front of thousands of fellow inmates at a prison rodeo. SCVNGR’s Seth Priebatsch recently wrote a guest blog about it at CNN, where he describes the game in greater detail, (and also uses the game as metaphor to expound on the journey gamification has taken these past few years):

Cain’s play-by-play at Angola reads like a deck of game-mechanics cards. To change behavior, he introduced a progression system that was notched with “appointments” — challenges inmates had to conquer to in order to get a reward. Rise to the challenge and you could earn the right to own a pet, to take a job, even the freedom to roam the grounds.

To reach the highest level, known at Angola as becoming a Trustee, can take up to 10 years. It’s not an easy game, but it’s one that the majority of its players are highly motivated to play.

To earn the opportunity to compete for fame and high status among their peers at the rodeo, a prisoner must behave themselves well for ten years. A game spanning ten years (or more) with an emphasis on rewarding people by status is reminiscent of long-standing airline loyalty rewards. Only this time, people are avoiding bulls instead of riding birds. The rodeo gives prisoners a goal they can strive for, and the leveling up process gives them an opportunity to practice self-control and following rules. As is true of much of life, I see the journey they’ve taken as more important than the outcome.

The controversial nature of putting prisoners in a dangerous situation for the entertainment of a mass audience didn’t disturb me as much as the rules of the rodeo, and how they seem to reward men for the same things that likely put them in prison in the first place. In the final game, Convict Poker, the winner is the man who can play chicken the longest with an angry bull charging at him. The fight instinct is emphasized over the flight instinct, and it matches prison and gang culture in and outside of prison, where men who prefer not to fight are losers.

In any case, Warden Cain as game designer certainly knows his player type (achiever) enough to make the rodeo appealing. If it boosts prisoner morale and keeps them and corrections officers safe, the only thing to say about this game is “Yee haw!”