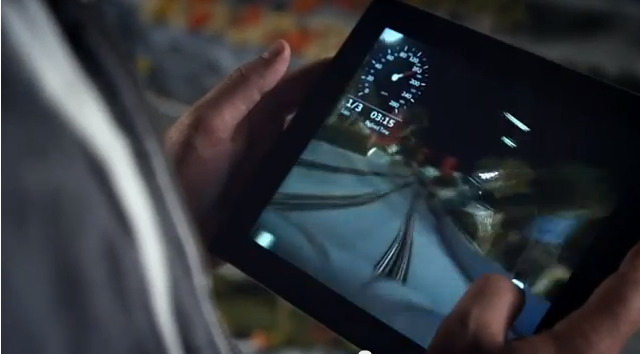 Test out the A4 Quattro with some slot car gamification

Audi Canada set forth to display the new Audi A4 Quattro’s handling abilities in a slot car circuit featuring an iPad controller, full HD camera action, and a chance to win the chance to test drive an Audi R8 around a real race track.

The Audi Experience slot-car track was produced out of a collaboration between Audi Canada and advertising agency Zulu Alpha Kilo. Meticulously built by company Slot Mods, the Audi Experience featured three 1:32 scale sized A4 Quattros that could be controlled by three simultaneous players who were racing for the best lap-times. Each of the racers would control the slot-cars with iPads that could show a first-person point of view of the cars being driven. The whole model circuit contained about 4 1080P HD cameras that recorded all the action as well and could be shared in each of the racers’ Facebook, Twitter, and YouTube accounts.

Each players’ race times were also displayed on a live leaderboard at the installation and online and the fastest racer would win an Audi Driving Experience package that would allow the winner to take the Audi R8 supercar for a lap around an actual race track.

Audi’s Quattro Experience was built out of a desire to present the new Audi A4 Quattro’s handling abilities in a new and inventive way but it doesn’t actually do that. But that’s okay! This is the “reorganizational” power of gamification.

Audi Canada and Zulu Alpha Kilo had the end-goal to present the Audi Quattro’s driving abilities in a fun and exciting way for consumers and achieved that by presenting all the car’s abilities in a new and interactive form factor that would change the traditional test-drive experience into something that is low-commitment and outside of a car showroom.

All of the slot-car’s constituent parts displayed on their own may not be so exciting but when presented in a new fashion like this, it becomes exciting for anyone to see (See Sebastian Deterding’s 9.5 Theses on Gamification). This is how one can repackage any concept and make it more engaging for users, whether it be in enterprise, education, or health.