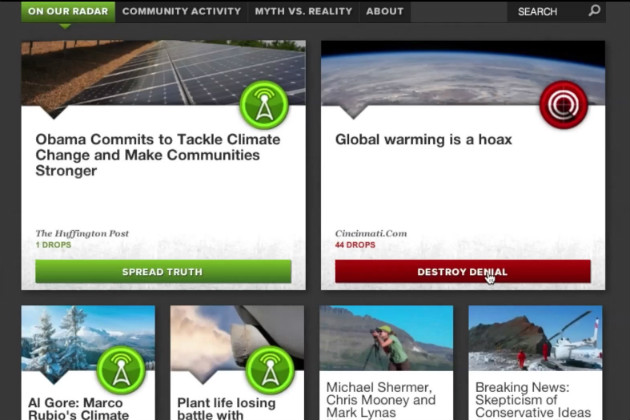 I have to say this is pretty much the most uninspiring example of gamification I’ve seen and from Al Gore no less realitydrop.org

It’s easy to see why Jane McGonigal and other commentators might loathe Al Gore’s new game social sharing game “Reality Drop.” It feels like it was written by your dorky middle-aged Dad who only knows how to speak corny, and judging by the pop culture gurus she associates with,  Jane is probably disappointed that during this game Al Gore doesn’t pop out of  stage curtains in front of a TV studio audience to scream “look under your seat -Reality has dropped! You win a Prius! You win a Prius! Everybody wins a Prius”

Someone tell Al Gore to stop wrestling with pigs and get out of internet comment sections. theverge.com/2013/3/1/40544…

After playing Reality Drop, I find it might be helpful for us to collectively lighten up. There’s a reason it says BETA underneath the title of this game. It needs to be tweaked based on results and user feedback, but it represents a solid effort in climate change awareness for a public that for the most part is not going to do research beyond a superficial glance at what their friends are sharing on their Twitter or Facebook feed, a stream of information often considered annoying and spammy.

We have to be careful what we label spam in the context of sharing information through social media, because one person’s spam is another person’s source of inspiration.  A friend’s checking-in to his gym via Foursquare every day could be interpreted as over-sharing boastful behavior that you immediately hide lest you start to feel slothful. Or it could be seen as a reminder every day that others are making fitness work for them and you can too, (perhaps even by working with that person).

The influence of peers saying “I care about this issue enough to share it with you” combined with a constant information flow about climate change on your social media feed can do much to keep the conversation going in a world of the 24-hour news cycle.  Having just a cursory glance at an article with a climate change headline as you scroll past it does more to keep the idea fresh in your mind than having no article at all.  The Climate Reality Project should be applauded for putting their foot forward into the message marketplace. They are competing for attention with articles about the latest Chris Brown scandal, and I say God speed to them.

It might seem lame to give people points for cutting and pasting climate change information, but if it gets people to share an article about an Ice Age study that’s exploitation I’m willing to accept.

You might not like it but systems like this work. We’ve seen the Israeli Defense Force blog use social sharing incentives and saw a 200% increase in engagement levels..

If they could streamline the website’s interface and package their information more cleanly this game could catch on. A greater emphasis on rallying their team rather than solely vilifying “the other side” will keep them from going the way of PETA in terms of public irritation levels. One lesson we all learned back in 2006 from High School Musical is “we’re all in this together.”

The use of games to bring awareness to important geosociopolitical issues like climate change is an encouraging trend that I hope continues.