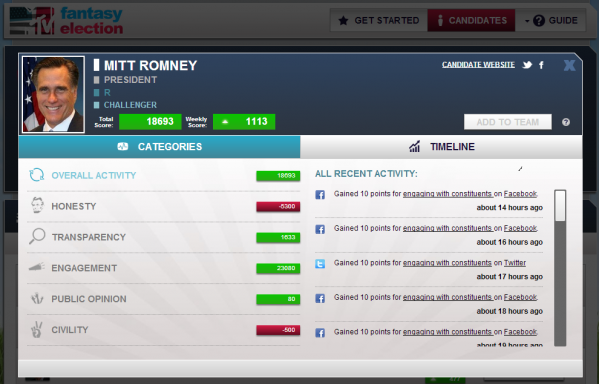 Prior to the 2012 elections, MTV was working on new ways to better engage US citizens to be involved in the American democratic process. With support from the Knight Foundation, MTV conceived Fantasy Election 2012, an online game which gave users a new way to hold electoral candidates accountable while being rewarded for getting involved in the electoral process.

Inspired by the wide spread popularity of Fantasy Football, users are given the opportunity to draft their best team which include candidates running for the presidency and congressional seats. Upon assembling their lineup, players can gain or lose points based on the real time performance of its selected candidates. Candidates are evaluated based on 5 categories: constituent engagement, honesty, transparency, civility, and public opinion. These performance feedback indicators are sourced from multiple non-partisan organizations and ultimately channeled to MTV Fantasy Election.

Fantasy Election participants can also gain bonus points when they involve themselves in the election. Bonus activities  include following relevant newsfeed on affiliated social media platforms, reading articles about the election on news site partners and answering daily questionnaires. Eventually, every Fantasy Election player had a chance to win a variety of prizes sponsored by MTV, ranging from an all-expenses paid trip to the MTV Video Music Awards to a $25,000 cash prize and even $10 gift cards.

We came up with 5 good reasons for why you should play this game when it was released but it has since concluded and shed some interesting insights on the success of the game. By the end of it all, MTV accumulated vast amounts of quantifiable data and was able to draw the following key findings from this experiment:

1. Prizes worked as a primary motivator

A survey was conducted at the end of Fantasy Election which showed that a staggering 75% of respondents said the primary reason they played the game was to win prizes. Only 15% listed their main reason was to “learn more about candidates and the electoral process” as the main reason while 3% said interaction with their friends is why they played.

When analyzing their analytics, MTV was surprised that fewer than 20,000 Fantasy Election players managed to undertake 500,000 positive civic actions in a time period of less than two months. In comparison to another MTV initiative,

“Darfur is Dying”, it has been played by 2 million players for 7 years but only 50,000 actions were taken.

Although Fantasy Election’s website received nearly 140,000 unique visitors, it only led to 10,000 active players who made their way into full league play. MTV believed this was due to the lengthy onboarding process despite simplifying the required steps to three stages which includes: authenticate through Facebook, start or join a league and finally draft a team.

From these results, gamification designers could draw a few lessons and caveats from Fantasy Election. First and foremost, the experiment highlights that money is and can be a powerful motivator for users to participate and engage with a gamified system. Money and extrinsic rewards worked for Fantasy Election as the system was to function for only a short duration.

The rewards were meaningful and valued by its young target audience but most importantly, it helped gain traction for the build up phase of the system. Thus, when designers account for the suitable factors for implementing a rewards system, it can magnify the effectiveness of a gamified system. Nevertheless, there is a danger of players becoming so transfixed on the prizes, they resort to cheating in order to while ignoring the original purpose of the game. In other words, a rewards system should never be implemented simply for the sake of implementation as it may do more harm than good by triggering unintended behaviors.

Secondly, understanding a user’s motivation and its environment, coupled with the willingness to experimentation may led to surprisingly effective results. The inclusion of bonus points was not part of the initial design for Fantasy Election but designers understood that its players who are also most likely potential voters in the real world, desired meaningful civic actions. Thanks to the designers’ foresight, bonus points served as a positive outlet for users to get involved in the election in addition to boosting the success of the game.

Last but not least, simplicity in design may be the best way for designing a system especially during the early phases of the platform. With the growing number of tools and design paths in which gamification designers are given the luxury to choose from, it is tempting to go for an immersive and complex layout. It is the designers’ utmost responsibility in finding the right balance between devising an easy setup for users to be integrated into the system and to guide them through the important functions necessary to operate the system. You could have a perfect gamification system but if you can’t successfully onboard anyone to use it, then it is for nothing.

With the advent of a information-rich society and increasingly prevalent gamified culture among youth, the use of gamification covering serious topics such as political action and global health interventions (see Global Citizen) may be the answer to engaging a disenchanted target audience. MTV’s decision to employ gamification to engage a young audience on civic action is a precedent for other companies to follow. In order for enterprises and organizations to achieve success through the utilization of gamification,  it is imperative for them to learn not only from their own successes and failures but to study from the example of others as well. In the end, it is all about constantly reiterating their system while finding the balance of implementing each game mechanic and principle within their platform.

You can read more about MTV’s Fantasy Election research, documenting their successes and failures from their whitepaper.