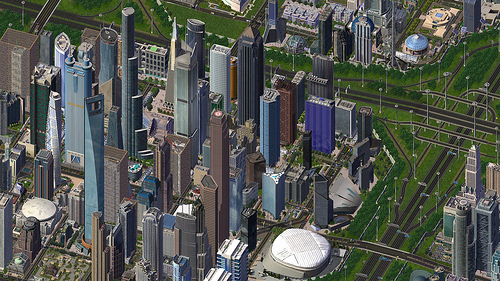 Can SimCity Inspire the Next Generation of Urban Planners?

SimCity is an urban-planning game that is now being used for education in the form of SimCity EDU. The game can teach anything from economics, urban planning, and even environmental studies. The goal with SimCity EDU is to make the game a common part of the classroom experience; students can learn a wide variety of subjects, while working work together, and teachers can create detailed curricula that adhere to learning standards. However, that isn’t to say that the standard SimCity game couldn’t be just as educational as the version designed for classrooms.

Because of the realistic nature of the game as an urban city simulator, one clever gamer by the name of Mike Rose, has been experimenting with using SimCity as a tool to address problems in cities.

Mike Rose wrote a blog on Gamasutra about using SimCity to figure out why his hometown of Northenden had such a significant traffic problem. Despite Northrenden being a relatively small town, Rose was amazed to see how a town with such a small population density had such issues and traffic delays. Rose points out that the town becomes a traffic bottleneck during rush hours with all commuters attempting to get onto a parkway or motorway at the same time.

To get to the pressing point, Rose created a near faithful representation of a clustered area of his hometown where it connects to other cities – where the major problems are –  in hopes that the virtual residents of Northenden would venture and lead to delays and traffic problems. It turns out that his theory was accurate; there was a major delay in commuting and claustrophobia-inducing traffic. The issue worsened further during in-game rush hour, proving SimCity’s ability to accurately simulate the flow of traffic.

Rose concluded this experiment by stating this non-scientific experiment didn’t prove anything that could actually be used to solve the problem. However, this was a story still worth sharing about the capacity of SimCity’s simulation prowess and for Rose, “…this little project definitely gave me a sense for what could be accomplished with SimCity if put in the right hands”

Following an example of recreating a real issue, Rose then decided to see if SimCity could accurately explain crime-levels in a particular city and set his eyes on Liberty City from Grand Theft Auto IV.

SimCity may not be able to actually fix or give a concrete answer to a city’s problem, but it can at least replicate the issue and be used as a demonstration. Sure, Liberty City is a virtual location loosely based off New York City but questions like “Why is there so much crime?” and “why aren’t there more cops?” are seldom asked or even considered. By recreating the a small part of the world in SimCity, the simulator itself can shed some insight on why Liberty City is as crime laden as it is.

Rose’s first immediate observation is that there was a low police station to city-size ratio. Not only are there not enough stations, but the existing ones aren’t spread well enough. There were barely any stations near the docks where a majority of crimes in Liberty City happen. His next observation was that there are just too many people and too few places to work, a likely explanation for why citizens are resorting to crime to make a living in the area.

Even if Rose’s recreation of a virtual city is a simple experiment using SimCity, it can still be eye-opening when it comes to real life problems. It’s not farfetched for urban planners to examine a virtual world as a possible simulation for what could happen in the future. Playing SimCity points to the bigger idea that it can simply get people to be inspired to look at and analyze problems in cities. Just as one school in Sweden hopes to do with Minecraft, SimCity could be the first stepping stone for creating the next generation of city planners and engineers around the world.

Being in complete control of a city gives you the freedom to construct anything you can imagine. The possibilities here can lead to more creative thought, a better comprehension of balance, and the desire to examine their own lives more carefully. Take Mike Rose for example – he saw a problem in his home town that he felt needed to be addressed so he went to SimCity to obtain a better understanding of it. Gaming can keep stress down and provide entertainment, so why can’t problem solving in a virtual setting translate to better life outcomes? I can safely say I’ve learned many lessons sitting in front of my television that caused me get up and become ambitious. Build a town in SimCity and see how it can lead to building a better tomorrow.