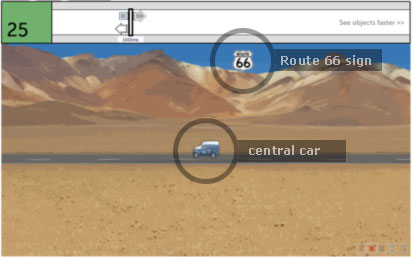 Games always don’t need the flashy graphics paired with capturing audio to make it engaging. Clear objectives and a desire to compete against the self is another effective method for improving skills through a game. According to Mashable, Researchers at the University of Iowa have shown this through their recent success through Road Show, a visual puzzle game aimed at improving senior citizen cognition.

Stemming from an interest of finding a way to reverse the effects of aging on cognitive processing speed and mental agility, they ended up with a game as their solution. Not surprising, as play isa key to learning! Even when playing just requires you to recall images from memory, learning occurs. And that’s all Road Show is. A visual puzzle game that shows pictures of cars and trucks with 8 signs around their plates. Seven signs say “Rabbit Crossing” while one sign says, “Route 66.” Once the image of the car or truck disappears, your objective is to recall the model of the vehicle as well as the location of the “Route 66” sign. Easy? Well, as the game progresses, the duration the image stays on screen shortens and the signs move farther away from the screen.

To be honest, this game sounds more like a psychology experiment than anything fun. Consider working out or going for a run. You want to put in a better performance than last time, and the same works for a game you know is training your brain. Competing with the self is a powerful tool for growth, and the University of Iowa claims that brain plasticity is what helps the brain repair itself after learning from repetitious behavior.

The study was conducted on two groups of people, aged 50-64 and 65+. Both groups showed an increase in cognitive speed just after playing Road Show for 10 hours. “As we age our cognition generally declines. We slow down,” said Fredric Wolinsky (a researcher). “So what we’re trying to do is use the positive side of brain plasticity to regain the cognitive processing speed that [older people] had before, and maybe even make it better than before.” It’s the neural version of ‘use it or lose it.’

A game that doesn’t pride itself in its looks but rather its content may lose aesthetics points. But, it hasn’t been that long since the world was hooked on Atari or NES games. Road Show gives the player an objective and asks, “Can you beat yourself?” By obsessing over answering that question, you find yourself on round 100, not even realizing that your brain just grew.

If you’re interesting in learning more about the Road Show puzzle game, you can check it out on its PositScience page.