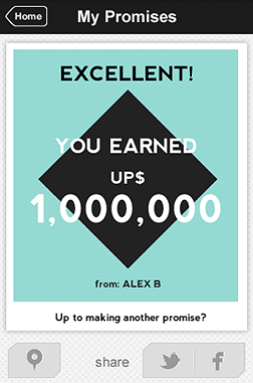 Many individuals are capable of keeping to their promises, but there are also many others who are unable to do so. The fallacy of making promises is that there is no one else besides the person who is being made the promise to that will hold the individual accountable for his or her actions. As there is a lack of an immediate feedback loop, it leaves the individual complacent in accomplishing their tasks and making good on their end of the promise. A new IOS app, PromiseUP aims to change that by helping people to fulfill their promises.

By serving as a virtual feedback system, PromiseUP helps users keep track on their progress while enabling themselves to be accountable for their actions and promises. At the start, new users are given 1000 UP dollars, the app’s virtual currency to serve as a wager. As users state their promise and when they aim for it to be accomplished,  they would allocate a certain amount of UP dollars. The wager could be bet against themselves, or towards other users, as witness to their attempt. Should they succeed in their task, they win the allocated bet but lose it all if they fail. 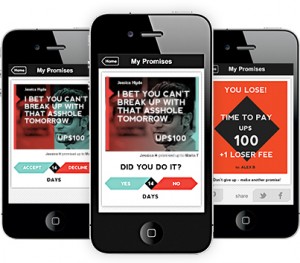 As users accumulate UP dollars upon completing their promises, they could then use the virtual currency to redeem tangible prizes at the UP-Shop.  Conversely, if users eventually lost all their starter amount, it is not entirely game over as they could purchase more UP dollars with real money to continue. It has been noted that the purchase of virtual currency through real money served as the basis of the startup’s business model.

The reasons for people failing their promises may vary, but one could argue it is due to the lack of a tangible feedback system. People tend to get discouraged when they are unable  to see progress despite their all-out efforts. Moreover, the lack of a constant reminder of the rewards and benefits they would obtain upon accomplishing their promises further negates their endeavor. Thus, it is not surprising why people abandon their promises all too often and revert back to their old ways instead of focusing on the goals they initial conceived.

That being said, PromiseUP is not the first of its kind as it has close similarities to other goal setting apps such as Klash. Nonetheless, the purpose of the app is straightforward from a gamification perspective, to serve as a personalized feedback system. The growing popularity of goal setting apps should be embraced by many as these apps are the feedback systems people need. They are positive motivators for individuals and ultimately serve to better ourselves.