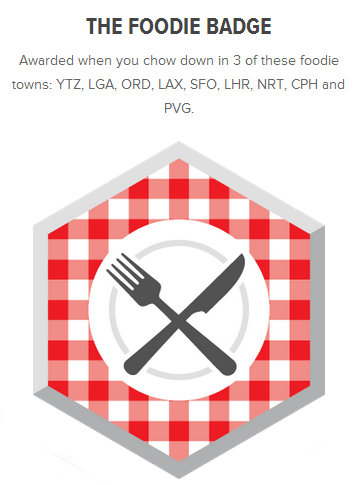 There’s little question that the loyalty “industry” has an innovation problem. With few exceptions, the world’s largest loyalty programs (mostly in travel, finance and retail) are mostly the same as they were 20 years ago. Social, mobile, gamification have struggled to find a footing, even as they are the entire foundation of next-gen loyalty systems  such as those developed by Square, Belly or any number of gamified providers. With so much inertia and torpor, it’s easy to give up on traditional loyalty providers when it comes to innovation…but perhaps the old dog has a few tricks left.

A few weeks ago, through a social sharing post by a friend (this data point will be crucial), I came upon a new promotion run by Air Canada, called Earn Your Wings. The program created a leaderboard of top flyers during the promotional period that were ranked based on a range of activities. These included, but weren’t limited to, miles flown and were supported by a series of badges awarded for different activity loops. Top players split a large pot of 10 million miles at the end of the promotion period, and that activity seemed especially fierce, which is what really excited me.

Ian Di Tullo, Director of Loyalty for Air Canada (AC) explained to me in an interview that the company had long experimented with socializing loyalty, but – like most operators – a “big win” was elusive. The company’s business objectives however mandated that they try innovative ways to get people to be “cross activated”, meaning: fly further, fly more often, and spend more to fly. Their competitive market dictated that they needed to keep trying, and gamification was the obvious solution.

In Di Tullo’s words, gamification’s principal purpose was to vastly simplify this promotion’s inherent complexity, adding “badges, in particular, make it very easy to focus customers on pretty complicated tasks, and those are the foundation for lasting behavior change.” For example, if you want users to visit 3 new cities, fly to both coasts and go in first class twice, it’s much easier to create “incomplete badges” for each activity and display them on a page than to explain each one separately in text. Once users understand that each badge represents a challenge to be completed, it acts as a valuable shorthand for behavior.

Understanding this potential for gamification to transform loyalty was the catalyst, but AC and Di Tullo have a long view for its potential. In the medium term, the company wants users to be more excited for gamified concepts overall so that they can deploy them more broadly throughout the program. This will – ostensibly – allow them to increase the complexity of their offering, which is necessary because of the limitations of virtual currency systems.

Once a currency becomes entrenched, and so many stakeholders depend on the economy, Di Tullo observes that it’s very hard to make the system more flexible to serve new business objectives. And while gamification designers know that increased complexity is tolerable at higher levels of user mastery, they can quickly become excessive for novice users. AC and its program Aeroplan have come under some criticism for this exact issue in recent months.

Another element of the Air Canada leaderboard campaign that was attention grabbing was the competitive nature of the program, as leaderboards are inherently competition oriented. Di Tullo explained that the company sees loyalty program users divided into two groups: regular users, and highly-engaged users with a competitive streak. The goal in this case was not to shy away from the competitive elements of loyalty – as most other programs have done – but rather to embrace them. By ensuring that competition could occur with some privacy protection (user handles and blended point systems aided this), the idea was to activate that competitive desire.

And it certainly seems the AC leaderboard program achieved that objective. Although Di Tullo couldn’t disclose specific revenues, the program’s registration levels were double the forecast, and engagement levels for both active and inactive users were better than expected. The program has already achieved a positive ROI, and a quick glance at the leaderboard itself shows that there were significant revenues attached to it (just add up the value of those badges).

The other big achievement of the program was to get people to share their loyalty activity with others on social media. Although this seems obvious for any software business, it’s quite uncommon to see folks tweeting or Facebooking their latest loyalty milestone. Program operators have been slow to embrace social media and without gamification, haven’t understood the levers for (or need to) create “shareable” moments. In the gamified loyalty programs I’ve designed and advised, increasing that shareability has been a key objective, driving customer acquisition and re-engagement without having to offer points or stuff as an incentive.

In a twist that might surprise many loyalty novices, the role of loyalty at Air Canada is actually divided between the airline itself (where Di Tullo works) and the loyalty program – called Aeroplan – that is run by a separate entity. Although he took great pains to highlight that they work together in close concert, it makes good sense to me that this kind of innovative thinking would come from the “product” side, rather than the “vendor” side. Because of the demands of a large-scale virtual currency, and the needs to service so many different partners, outsourced engagement and loyalty vendors have a real disincentive to innovate. Even in the pure-play gamification space, many have accused platform vendors of “cookie-cutter” approaches, without understanding that repeatability keeps costs low and facilitates scale for both parties.

But the success of the Air Canada leaderboard program is a great case study for all loyalty-focused marketers and product experts. In Di Tullo’s words, “the main investment needs to be in design, not in technology.” Even when you work with highly skilled, scalable partners to deliver your gamified loyalty solution, you need to invest in innovative design – both in house and out – that can uniquely cut through the noise and drive your business objectives.

That, as it turns out, is increasingly becoming the Air Canada way. And in a market crowded with me-too, conservative, increasingly disengaged offerings, this gamified, social approach is more disruptive than it seems.